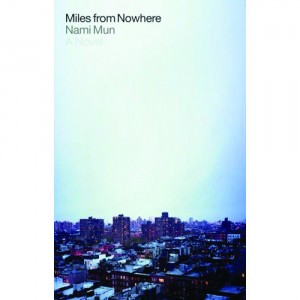 “It is the peculiar lowness of poverty that you discover first,” George Orwell
observed in “Down and Out in Paris and London,” the book he wrote after he
decided to see what poverty was like from the inside. “The shifts that it puts
you to, the complicated meanness, the crust-wiping.”

Orwell’s litany, however, is just the beginning of what Joon, the banged-up
teenage orphan who narrates Nami Mun’s startling debut novel, “Miles From
Nowhere,” encounters in her life on the streets.

Joon squats in burned-out buildings, sleeps on the subway, is sexually assaulted on an abandoned city block and cadges wisdom from street poets. She works door to door, fishes newspapers from the trash and sells them to commuters. She
doesn’t eat for days.

The story of how Joon survives all and more has the beaten-metal feel of autobiography hammered into fiction in the best way. Told in a flat, matter-of-fact tone, the book leapfrogs across Joon’s early teen years, jaggedly illuminating a life lived close to the ground, a life in which numbness is a virtue.

Perhaps that is because the worst thing that can be imagined for a child happens to Joon at the start of the book. Her father abandons the family after a series of affairs, and her mother slides into madness as a result. Faced with a choice between a broken home and no home at all, Joon chooses the later.

And so she winds up at a shelter falling under the sway of a tough, morally compelling young woman who goes by the name Knowledge. She leads Joon out onto the streets, where they stay for the next few years—their paths crossing and doubling back on each other as they slide into prostitution, drug use and drug pedaling.

This is a sadly familiar story. But Mun’s prose has so much casual energy and such a rough edge that Joon’s tale feels incredibly fresh. Many of the images are disturbing, almost otherworldly.

For instance, Joon works for a night at a brothel, where she sits behind a booth with a big plastic number around her neck. “Inside Club Orchid all the girls were chickens,” Joon describes, as if they were trussed up with numbers waiting for hungry customers.

After a brief, battered life of experiences like this, one can see why a teenager might alight on such a metaphor. And yet, after this tale, she will not be forgotten. (John Freeman)