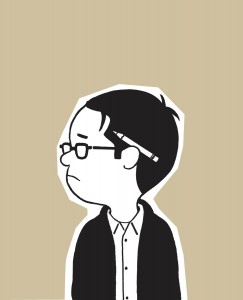 Seth and Adrian Tomine, two top-shelf Drawn & Quarterly artists, are in town this week. Tomine’s got the paperback of his fine, bracing “Shortcomings” and a reproduction “box set” of his earliest Optic Nerve comics, as well as the mammoth, daunting “A Drifting Life,” Tatsumi Yoshihiro’s eleven-years-in-the-making graphic memoir, the 850 pages of which he edited and lettered. Seth’s published “George Sprott: 1894-1975,” a large-formatted life of an apocryphal Canadian TV nature host. Memory and pangs of regret permeate each of the books.

Tomine tells me Tatsumi does his work without assistants, unlike a lot of Japanese cartoonists. “I found it very inspiring, not only in terms of its scope and ambition, but also in that it confirmed my long-held belief that it’s the small, quotidian details drawn from an artist’s real experience that will always bring a narrative to life. I think ‘A Drifting Life’ is a great depiction of the cartoonist’s struggle, and a great resource in terms of the history of Japanese cartooning. I think it will be read for a long time, especially as the American interest in manga continues to grow.”

Drawn & Quarterly’s artists seem to be making increasingly memorable “art books,” in the sense that the book is an artifact or artwork as much as a repository of the content. In his afterword to the reproduction of “Optic Nerve,” Tomine fears that the form is “aggrandizing,” although he seems reconciled to its republication and distraction. “I think the notion of a ‘house style’ at D&Q is really based more on coincidence, rather than any kind of imposition by the publisher. The ‘box set’ edition of ’32 Stories’ was the only way I could think of allowing that material to be reprinted. I think you said it just right, that I wanted it all to be viewed as more of an artifact from my teenage years, rather than as a collection of legitimate ‘stories’ that will hold up to real scrutiny. And you’re also right in thinking of it as a bit of a disruption to my present day work. I think an artist can get lost in the process of constantly curating his past work, but I felt like this was something that needed to be done. The alternative was to either let the material go out of print, or allow D&Q to just keep re-printing the book version of ’32 Stories” that I’d grown increasingly disenchanted with. But, in a way, the timing was perfect in that I just turned 35, I’m working on a new book, and those early mini-comics, more than ever, seem like quaint curiosities from a much more carefree, youthful time in my life.”

Seth’s twelve-by-fourteen-inch epic is another gorgeous product. “When I did the original work for the New York Times the only thing I was thinking about was how the strips would look and read in the magazine. Later, when the idea came to put them together in a book it was entirely my idea to make the book so large,” Seth says. “I realized the strips, being so dense, would really benefit from making them as large as I could reasonably make them. I don’t actually think D&Q made any suggestions to me about the book design or the size. Although I would agree that the current approach in publishing, generally, might be to make the book a more appealing object to separate it from the drab world of Internet text. For me the large size was also chosen to emphasize a really expansive feeling to go along with reading about a man’s life and its ending. And, it was probably the only time I have produced work that legitimately suits such a big book and it was fun to make a big book.”

The scraps of Sprott’s life come to an unexpectedly moving coda, the swoop and fall of George’s life becomes a kind of emblematic elegy for the “lost” eras of local television and for an idea of Canada. How much of George’s life is fantasia, I ask Seth, a generalized romance-anti-romance you might have about the country’s mid-century world, and how much is serious research? “It’s a bit of both. George’s life as a local TV celebrity from mid-century Canada is almost an arbitrary choice. I was mostly interested in writing the story of a man’s death and presenting it in a manner that was somewhat lukewarm—letting the reader decide if George’s death was tragic or not. Whether he was a good person or a bad one. The local TV connection came up because I was reading quite a bit, at that point, on the subject. I was just interested in it and it seemed like a rich background for the character and the story. It served my purposes.  So, yes, I did a fair amount of research. But honestly, I usually just run with this sort of material and make up whatever I want ultimately. It’s more about the feeling of these things than the actual facts. But, you’ve made a good set of assumptions about how I feel about that material and why I used it.” (Ray Pride)