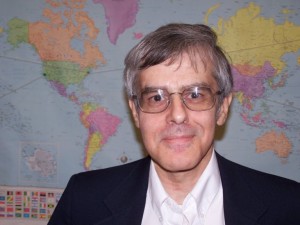 The Counter Intelligence Program, or COINTELPRO, was a series of elaborate covert and sometimes illegal operations managed by the FBI to disrupt and fracture dissident political organizations. Formally, the projects took place between 1956 and 1971; common methods included dirty tricks such as using forged correspondence, legal harassment and even vandalism and violent assault. COINTELPRO targeted groups as wide-ranging as communist and socialist organizations, the Black Panther Party, those associated with the women’s rights movement and the Ku Klux Klan.

Chicago author Barry Schechter met a man many years ago who claimed he was a target of the COINTELPRO; the conversation stuck with Schechter and planted the seed for “The Blindfold Test,” his first novel. Jeffrey Parker, his protagonist, attends an antiwar rally in the 1960s, and following that one brief afternoon, his life is a cascading nightmare. He can’t keep a job. Women frequently split. It’s not just bad luck, it’s the worst luck. It doesn’t occur to him that his misfortune might actually be a government plot, until it does, and Schechter’s part-comedy, part-thriller takes shape. “The Blindfold Test” is blanketed with paranoia, quite Kafkaesque in its dark, sometimes mean humor, as Parker attempts to sort out his mess of a life. It’s also set in Chicago and the surrounding areas, and the authenticity adds to the suspense in surprising ways.

“I’ve written this novel,” Schechter says, “which has certain nightmarish and symbolic qualities, but it’s also a Chicago novel… it’s probably the right combination of beautiful in parts and gothically ugly in other parts. It’s just kind of arresting and compelling.”

Setting the novel in his hometown obviously reduced some geographical challenges. “Yeah, I didn’t think of it as a challenge so much,” Schechter says. “The way I view Chicago is always to ground things. Chicago just keeps it gritty.”

Schechter began writing “The Blindfold Test” as long ago as 1986. He finished in 1998, couldn’t sell it, and basically stuck it in a drawer. A few years later it resurfaced in conversation and caught the attention of Melville House—it was released last week. He says he made little changes to the book for publication, surprising considering the amount of time the manuscript was collecting dust.

Some of the best parts of the novel—certainly the most enjoyable—are the specific instances when Parker’s life is manipulated by the oppressive plot against him. In one memorable instance, the last page of every book he owns is removed. In another, rotting meat is hidden behind his car’s hubcaps, creating an invisible stench that trails Parker everywhere. Schechter admits that coming up with the methods of torture was devilish fun.

“This business with the books actually has some basis in reality,” Schechter says. “I was living in grad-student housing at Columbia [University], and some law students were up on the roof getting drunk and throwing paper planes, and I went downstairs to get some soda, and I had been reading a Shakespeare play while I was up there, and I left the book behind. I [later] finished it and I thought, ‘I don’t remember the play ending this way.’ Eventually I realized that that wasn’t the last page of the play, that one of those puckish law students must’ve perfectly cut out the last page of the book. You might know better than I—is it possible that sort of error can happen [in the printing]? I should ask my publisher.”

Though Schechter takes pride in his Chicago roots, he did make one error that he’s quick to acknowledge, with the Yellow Line “Skokie Swift.” In his book, the Swift makes stops, and anyone who’s familiar knows that’s not the case. “I had never ridden the Skokie Swift, so I always just assumed there were stops,” he says. “One day I just decided to ask a woman at a CTA booth about this, so I said, ‘What are the stops on the Skokie Swift?’ And she said, ‘Skokie.’ Now she was a Filipino woman and I was wondering how good her English was. So I say, ‘The train gets to Skokie, what then?’ She says, ‘Skokie.’ So this conversation goes on for longer than five minutes before I finally grasp that it gets to one stop in Skokie, called Skokie, and turns around and goes back to Chicago. Unfortunately for me, I had already written [scenes] where the train is stopping at various places in Skokie, and finally I realized I had written myself in a corner, and I didn’t want to change any of that. So I just apologize to the reader. This book takes place in a world where there are such stops.”