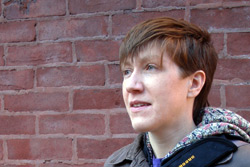 Those of a certain age have fond memories of late nights spent with mind-numbing video games. For some it’s with a Super Nintendo or a Sega Genesis, for some older than that the original Nintendo, and for some even older, the Atari 2600. Just last weekend I spent an evening revisiting the Atari and all it has to offer in its 8-bit glory; to my surprise and delight, Space Invaders holds up after all these years. Especially with a case of Old Style in the fridge.

Megan Milks, a PhD candidate in writing at UIC and the co-editor of cultural zine Mildred Pierce, explores the older, let’s say more “pure,” video-game age in her new chapbook, entitled “Kill Marguerite,” in which her lead character exists inside a video game and the reader takes in her trials and experiences in that setting. The experimentation works; the book, which comes via Another New Calligraphy, has a throwback feeling that in some ways feels like an approaching future and in others helps the reader long for an abandoned, 8-bit past.

“For me I never really remember how ideas come,” Milks says. “This idea came and it seemed to work. A lot of my writing explores revision in various ways. I felt using a video-game setup was interesting and the appropriate way to approach it.”

Though familiar, Milks says she’s by no means a video-game buff. “I wouldn’t say I’m a video-game fan now,” she says, “but when I was the age [of the book’s character] I had my hand at Super Mario Brothers and that stuff. There’s quite a lot of nostalgia in ‘Marguerite’ for retro video games.”

The experimental approach to the chapbook suggests a writer determined to work outside of the lines. “Let’s see, I have definitely tried very hard to write traditional, realist stories. Every time they’ve just been terrible. So I think that it’s not my nature. I don’t feel comfortable in that form. I don’t think it’s a form that has been developed for me, and that’s not the kind of fiction I seek out.”

Not that Milks is against it. “Mostly I just get bored, to be honest,” she says. “I’m not an anti-realist by any  means. I guess I’m really interested in genre, and a lot of my stories have been an experiment in trying to unite genres.”

So what union of genres does “Kill Marguerite” represent? “The fat-girl-gets-teased-with-video-game-elements genre,” she says. (Tom Lynch)