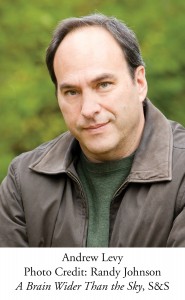 I forgot to ask if he had a headache.

I’d been fairly circumspect so far, rather than inviting Andrew Levy to grab a beer, or arbitrarily assuming that a coffeehouse was appropriate for our meeting—migraine triggers come in many forms, as his book, “A Brain Wider Than the Sky,” makes exceedingly clear. But somehow, I forgot to ask him if he had a headache, right now. So too, curiously, had the moderator of the discussion he’d just had at the Printers Row Lit Fest, Paula Kamen. But Kamen, herself author of a related memoir, “All in My Head,” always has a headache—a constant presence—unlike the chronic “nerve storms” that foment Levy’s migraines, so perhaps she just considers such queries redundant. In any case, I forgot to ask.

Levy’s such an easygoing presence—calm, articulate, friendly if not effusive—that it’s easy to forget the tempests that rage inside his brain. But boy do they rage. It was late summer, 2006, as he started a sabbatical from his job—he’s chair of the English department and director of the Writer’s Studio at Butler University in Indianapolis—to work on a book about Mark Twain, that the colossus set in. Four straight months, he suffered a daily migraine, dawn to dusk. “That’s why I wrote the book,” he said very matter-of-factly at the Lit Fest, about the migraine memoir that replaced the indefinitely shelved Twain tome. And it’s a book with the potential to connect to a lot of lives since, as Levy points out, twenty-three percent of all families have a least one member who suffers migraines.

As lucrative as its potential market may be, the migraine as subject is elusive, even given Levy’s inherent insight. Consider the typical arc of an illness memoir: the life interrupted, the dark days of the battle and the aftermath, hopefully with a physical cure, but minimally with an emotional one, as the memoirist lives a newly enlightened existence. Migraines don’t package so neatly, but Levy makes do, wrapping his personal story around three main explorations: the history of the disease and its treatment, the astonishing number of creative bursts in human history associated with its suffering and an exploration of the current thinking about the science of the brain, the causes of migraine and the chemical treatments now emerging.

The reader wants simple closure and gets none, for the migraine, though better known by science now than ever before, is still an evasive malady. We not only have no cure—though some pharmaceutical ameliorations are available—we don’t even have a consistent diagnosis. We know there are many triggers, but no uniformity across enough of a sample size to draw any useful conclusions and so, as readers, are left in the same place as the author; better informed but still debilitated by the subject.

This conundrum could be insurmountable to the writer trying to make sense of it all, but Levy turns to the literary toolkit and fashions something of a departure from the traditional story contour, wearing his linguistic challenges on his metaphorical sleeve. The book sometimes flows like you’d imagine the headache; with starts and stops, narrative that doesn’t quite follow a straight line; as Levy writes, “The language of migraine is a language of indirection and gaps.” The reader’s occasional slight disorientation is intentional: “I wanted something different, something that might simulate the feel, the curves, the sweep of the migraining mind.”

If the dots often disconnect, the curves are sometimes marvels. Many migraineurs experience an aura before or outside of a headache, for example. To the outsider they sound a bit like seeing the world through acid-free acid-trip eyes. Levy’s at his strongest here in attempting description: “One talks, drives, works, kisses, as a curtain of fire moves from left to right, as the sky turns into Guernica.”

Both author and reader are especially engaged when he explores the connection of migraines to creativity and notable historic figures from politics, science and the arts. The examinations of the disease’s history and contemporary science fill in necessary blanks but suffer some by the author’s seeming relative detachment. No culminating armchair diagnosis here; Levy’s prescriptive is almost comically cautious if plainly sensible: “When dealing with a shape-shifting disease like the migraine, the best treatment is some combination of self-knowledge and a really good, trustworthy pharmaceutical.” The quick-fix self-help dollars might stick in their wallets on that one. 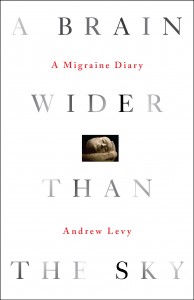 But the wondrous flights of fancy offered by a book that draws its title from Emily Dickinson are palpable. Levy’s a crafty cultural historian (his prior book, “The First Emancipator,” was a critical smash) who seems to be making a seductive case for the migraine as trigger for greatness; he almost makes you wish you were a migraineur. After all, who wouldn’t want to join the club that, according to Levy, includes Thomas Jefferson, Alexander Pope, Elvis, George Bernard Shaw, Rudyard Kipling, Alexander Graham Bell, Tchaikovsky, Wagner, Chopin, Mahler, Charles Darwin, Sigmund Freud, Ulysses S. Grant, Giorgio de Chirico, Virginia Woolf, Nietzsche, Carl Linnaeus, Pascal, Joan Didion and so on? Almost.

In the process, Levy is suggesting an alternative history of, well, everything, rewritten through the kaleidoscopic lens of a misunderstood ailment:

“Would Nietzsche have dreamed so desperately of a Superman if he had not felt the need to transcend those three-day headaches? In turn, would Hitler have dreamed so hard of a master race if Nietzsche had not dreamed so desperately of a Superman? And so on.” No canvas of culture is untouched by Levy’s revision: at life’s end, Elvis suffered migraines so severe he was hospitalized. “Those drugs swirling around his system during his last days were not, in other words, just treating decadence,” Levy writes.

Although Levy’s short but thoroughly researched book presents what evidence might exist for such notions, it is a speculative, wishful endeavor and he knows it. He writes, “I have to admit: I felt validation as I found the names of famous people who had migraines, felt comfort when I saw how they succeeded in spite of it, even because of it, contoured their genius around the pain, or used the pain as a catalyst.”

But neither he, nor the reader, can resist the possibilities. Van Gogh? Who knows. “‘The Starry Night,’ with its whorls of light dancing across the sky, so stereotypically aura that it absolutely diminishes both headache and aura to even mention it. It is a postcard of a migraine.” Lewis Carroll, maybe, but “Alice in Wonderland” certainly reflects definitive association: “There may be no better literary representation of migraine in history—not the pain but the distorted and escalating sensibility.”

And more: Freud comes out of a three-day migraine in 1896 with the “key ideas for ‘Interpretation of Dreams’ in his noggin, almost like a reward for the pain.” Jefferson suffered for six weeks the worst headache of his life and followed with a six-week burst of productivity that included the Declaration of Independence and, for kicks, a constitution for the state of Virginia. (Levy enjoyed his own barrage of prolificacy in writing this book, which took fourteen weeks to write; his previous took seven years, he says.)

Levy’s cautious with disclaimers, but he leads us to believe that the migraine has some real connection to the unbound mind: “I cannot tell exactly what migraine and creativity have got to do with each other, if migraine is a kind of creative activity, or a kind of thwarted, damaged creative activity.” Even if the premise is a stretch, and I’m not suggesting it is, you can’t help but feel that there’s some sort of cosmic justice at play. If you are sentenced to a life of suffering such capricious pain beyond understanding, it’s only right to be compensated.

Perhaps it’s natural that one who suffers such inner turmoil would seek a life that outwardly seems rather calm, normal. “I signed a fitful treaty with migraine: a more modest menu of drugs, a smaller life, but one I can savor, and migraines that still come, come like the seasons, and remind me who really rules the roost,” Levy writes. Originally from New Jersey, Levy went to Johns Hopkins for a masters, Penn for a PhD and settled in at Butler for his first post-graduate job and never left. His wife, Siobhán, and son, Aedan, not only round out the picket-fence scenario, but their relationship to the migraine is an integral part of Levy’s book.

Accordingly, most who read this book will likely have a direct personal connection to its subject. After all, it takes a certain kind of masochism to subject oneself to “pain without meaning, without discernible source,” even when the pain is delivered through the comparatively gentle secondhand of words rather than nerves, unless you have something to gain, some insight, some relief. I had my kinship and it still took me a couple of passes at the subject before I’d commit to reading it. My wife has suffered chronic migraines as long as I can remember, and I wanted to learn more about what was going on inside her. Migraines are a personal and peculiar condition; her suffering is devastating yet all internal; the causes and cures seem equally elusive. Levy’s book is richly empathetic not only to her suffering but also to my circumstance, through the exploration of what his headaches do and have done to his marriage. His wife might be closest to his ailment but she still stands wholly outside, both heartbroken at her spouse’s pain and frustrated at its inability to be tamed.

When we met, Levy was a bit edgy. Happy to talk, but something’s weighing. His wife and son have been killing time waiting for his appearance and our interview to finish; is that what it is? Given the hours, the days, the weeks they’ve logged alongside his migraines, is he loathe to waste his hours of clarity away from them? He doesn’t say but he doesn’t need to. If he doesn’t have a headache now, he likely will soon. He says that, even after the journey in his book, he’s still suffering fifty to sixty a year now. Is the drive home to Indianapolis a potential catalyst? The weather? Something else?

More likely than not, a trigger’s been pulled, and now, as always, the dreadful wait. Migraines can be “like living inside a Thomas Pynchon novel,” he says. It’s deceptively complicated like that.