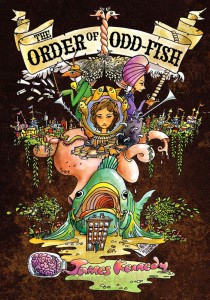 Local author James Kennedy, whose first book, “The Order of Odd-Fish,” was listed as one of Smithsonian’s Notable Books for Children in 2008, will read from and sign his book at Quimby’s Bookstore this Friday at 7pm. In his blog, Kennedy writes about his habit of leaving things unfinished, something he feels helped him with this book. “The thing that kept me going is that no matter what job I was doing I only had confidence in that I would be a writer and I spent most of my free time working on that,” he says. “All the various jobs and interests I had…and failed at were all the things the story ended up being about.” “The Order” has been described as a combination of J.K. Rowling, Roald Dahl, C.S. Lewis, Lemony Snicket and several others, but Kennedy says his inspiration comes mostly from adult authors like James Joyce. “I don’t read as much children’s and young adult literature as I should,” he says. “…[‘Ulysses’] was a novel that was all about one day and one city and I liked the idea. By the end of the book you have this idea of a real feeling of Dublin as a real organism…I wanted to do a book about a city.” Kennedy is currently working on “The Magnificent Moots, a story he describes as a mix of A Wrinkle in Time,” “Ender’s Game,” “The Hitchhiker’s Guide to the Galaxy” and “The Royal Tenenbaums,” and plans to eventually write sequels to “The Order of Odd-Fish.” (Beth Wang)