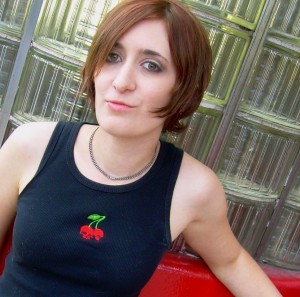 Older generations teach teenagers the strangest things. Conflicting ideas often offered as sage advice demonstrate both a lack of creativity and, also, an inability to really offer anything of much substance. No wonder teens are so pissed off all the time; anything anyone ever tells them is that the teenage years are the most difficult time in a person’s life, but also the best years. What are they to make of that?

Local author and Columbia College graduate Stephanie Kuehnert tackled teenage-girl angst already in “I Wanna Be Your Joey Ramone,” last year’s refreshing novel of punk rock and an adolescent’s struggle with finding her real mother. Identity issues traditionally surface in these tumultuous times of a person’s growth. Who we become, what we love, who we, essentially, are—these important and life-lasting pieces of the great overall puzzle form their foundation between cut classes, packs of smokes hidden from parents and nervous trips to 7-Eleven to buy condoms.

In culture, possibly even more so. The records you obsess over in high school will always live in the confused and angry place in your heart. Favorite books are discovered in those years too; most likely films as well.

With “Ballads of Suburbia,” Kuehnert’s lightning-fast follow-up to her debut, she returns to these times. “Joey Ramone” was a bit of a fantasy piece—realities bubble, sure, but it’s more of a book about hopes than it is about nightmares. In her second book, Kuehnert focuses on a gang of discontented teens each facing substantial strife. Kara, her ringleader, tells us her high-school story, the agonies of her friends, the drugs, the loves, the booze. Each of her friends offers their own “ballad”—Stacey, the girl looking for acceptance through a neverending string of boys; Cass, who can’t lay off the acid; Adrian, dismissed by both his biological parents and his adoptive parents; Maya, whose mother has committed suicide; Christian, a secret menace. A dark book, Kuehnert explores the tragedy of teen self-injury, something she freely admits to experiencing in her own life.

Set in Oak Park—where Kuehnert grew up—the book is reminiscent of the earlier work of Richard Linklater, or, if you allow a bit of a stretch, it’s like an “American Beauty” for the teen set. “Ballads of Suburbia” flows with the unabashed bluntness of the type of classic song that inspired it, on the nose and with a heavy heart.

“Basically I think I like the kind of confessional aspect of it, the way it tells a story, or teaches a lesson, without being terribly preachy,” Kuehnert says of what draws her to ballads. “It just lays it out there. If you listen to Johnny Cash songs, he just lays it out there. Look at ‘Cocaine Blues.’ Don’t do cocaine! There you go! He laid it right out there without being preachy. I guess I’m just a collector of honest and sad stories.”

As much as it may seem, Kuehnert insists her book isn’t overly autobiographical. “What I tend to draw from is the emotional truth of situations,” she says. “I’m really focused on how certain things make me feel, and I like to take that feeling and put it into a story somehow. I really like place, and to play with place. I lived in Oak Park most of my life. I was reading all these books, all set in different parts of Chicagoland, and I thought that I have a corner I know quite well myself.”

“Ballads of Suburbia” is an enlightening experience, and imaginably would be useful for struggling teens, but Kuehnert says it wasn’t written specifically for one audience. “I don’t necessarily direct it just at teenagers,” she says. “I think a lot of it is just as applicable to adults. I’ve never limited my audience in that way, because when I was 14, or 15, or 16 I was reading the same stuff as my parents. However as a teenager I was seeking characters in books that reflected the way I felt in some ways. So even though I don’t write for teenagers, I write in hope [that it will be read] by teenagers seeking something. I feel that at that age, they’re seeking literature maybe more so than adults do.”

After two novels focused on confused teens, you’d think Kuehnert was obsessed. “Maybe I’m slightly stuck there,” she says. “I just like that moment when you come of age, it’s really one of the most pivotal moments in life. I’m just fascinated with what happens to people in their teen years and early twenties, how that time shapes them into the persons that they are. I’m sure as I grow older, and start to see midlife crises around, I’ll be fascinated with that turning point. The concept behind ‘Ballads’—I was trying to find that moment where their lives change, where something began to shape them. I’m extremely fascinated with that, so my books keep coming back to that.”