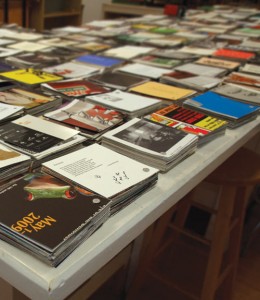 Early Sunday evening and Logan Square’s hipster hotspot The Whistler is sprinkled with patrons, some sipping the bar’s unique summertime cocktails, others just a PBR, please. The Orange Alert Reading Series takes place here roughly every third Sunday of the month and tonight’s lineup consists of “How to Hold a Woman” author Billy Lombardo, plus Andrew Farkas, Tim Hall and West Virginian Scott McClanahan. Founder and emcee Jason Behrends takes to the stage and thanks the modest crowd for coming. “I know it’s hard to come out to a bar at six on a Sunday,” he admits into the microphone. A handful of uninterested drinkers respectfully head out to the patio as to not disrupt the reading with their conversation. For the next hour, the only sounds you can hear are the author’s expressive voices and the air conditioner kicking on and off. Even the bartenders mix the drinks quietly.

“I’m definitely optimistic about the landscape in general,” Behrends says of the current place of literary events in Chicago, a day later over the phone. Behrends began his Orange Alert venture in 2006 with a Web site, orangealert.net, featuring interviews with writers, musicians and artists, then launched Orange Alert Press in March of 2008. The reading series began last November. “There are a lot of reading series in town,” he says, “but even though there are ten or twelve that I know of, I felt that there still could be one more.” 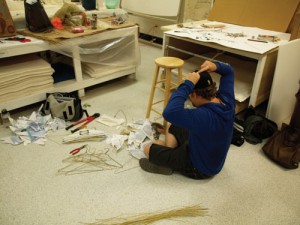 Since the economic crisis hit the publishing industry as hard as anyone, nationwide book tours by midlist to high-profile authors have been consistently down. If anything, tours have been regionalized; say, if you’re a New York author, you hit your hometown, Boston, Philadelphia, New Jersey and, well, that’s it. Publishers don’t have the money to send their authors all over the country for exposure, and only the lucky can finance such a trip themselves.

“The landscape is down,” says Bill Young, co-owner of Midwest Media, which works with publishers to arrange readings and other literary events. “Now the reason for it being slow last fall was the uncommon interest in the election. However, this fall is the best-looking crop of books I’ve seen in the twenty-two years I’ve been doing this. If these literary books do well, it could bring business back. But at the moment it’s really depressed.”

Young acknowledges the closing of bookstores—especially those in the Loop—as a major part of the problem. “I think there has to be more bookstores within the city,” he says. “I go on too many long drives to Naperville and Winnetka for events that should be held in the city. But I think that the city does as much as any city, with the Humanities Festival, Printers Row, October Book Month—which is more of a state of mind than an actual event, but it’s certainly a viable program.”

Young still sees business from the bestselling genre authors and celebrity memoirists, but says that he “hopes this is rock bottom.”

“The business of touring is going down the drain,” says Aleksandar Hemon, author of “The Lazarus Project,” which was a finalist for the National Book Award last year. “The primary reason for me, as a midlist author, is that I cannot sell 2,000 books at a reading like a Salman Rushdie or a David Sedaris. So the primary reason [to tour] is to get local coverage…but the newspapers are going out of business, and a lot of information channels have moved over to the Internet. It’s harder to get local coverage, there are fewer venues.”

“One of the reasons I started the show, which drove me insane, was that we were a fly-over for authors, because there weren’t places here for authors to come,” says Victoria Lautman, who hosts the “Writers on the Record with Victoria Lautman” series. She says that decreasing arts coverage in the media plays a large role in publishers’ decisions not to send their authors here. “I don’t know what we can do. I feel pessimistic.”

She continues, “It’s frustrating for young, up-and-coming authors who want to be on a national or international stage. You have to think about positioning yourself [to be seen] beyond the confines of your own Midwest area. I don’t know if that’s going to change. It’s really hard to see. We’re in a free-fall situation.”

Lautman, however, does have a significant fall season slated, including appearances by Richard Russo and Audrey Niffenegger.

The Chicago Tribune’s Printers Row Lit Fest—formerly known as the Book Fair—is the city’s largest annual literary event. Attendance was slightly down this year, according to the fest’s producer, Haley Schaeffer, due to the inclement weather, but the event still attracts more attendees than any other event of its kind in the city, so much so that other festivals are being planned for Naperville and Aurora. Still, Schaeffer faces challenges with the city that hold the event back. “If the city would work with us a little closer and close down a few more streets,” she says, “we could bring in more vendors, and make it more of a street fest like you see in Chicago. This year, we brought in food and beverage and that was hugely successful for our vendors; they’re excited to come back again.” Why is the city so apprehensive to allow the festival to expand? “I don’t know,” Schaeffer says. “Part of it is they don’t like what we [Chicago Tribune] say about their boss every day.”

Schaeffer also says that this year the festival’s budget “skyrocketed” $30,000 due to merchant-permit fees, a bill that was waived in previous years. For an event that Schaeffer even admits is getting more and more difficult to sell internally, seeing as the company has little revenue tied to it, a rising price tag certainly doesn’t help. 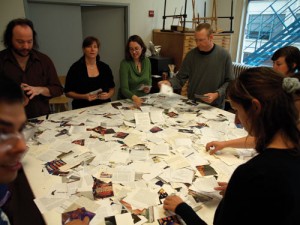 Author readings in bookstores across the city are down. Barbara’s Bookstore has reduced programming, as has Borders, which will only decrease even more once the Michigan Avenue location shuts its doors for good. Quimby’s in Wicker Park still offers a respectable schedule, but it’s often filled with quirky, left-of-center events. Andersonville’s Women and Children First, Lincoln Square’s Book Cellar and Hyde Park’s Seminary Co-op and 57th Street Books currently offer the most consistent programming; Book Cellar, it seems, has even stepped it up in recent months.

Tom Flynn, who handles programming for Seminary Co-op and 57th Street Books—and occasionally books events at the Newberry Library—calls the current Chicago literary scene “reasonably robust,” but acknowledges “there are problems in that even before the financial meltdown publishers were sending fewer and fewer authors through Chicago, and in a way [the bookstores] were all competing with each other to a certain extent, and that doesn’t help much. We’re the third-largest city in the country, but we’re still a fly-over state.”

Flynn says declining book coverage in the media contributes greatly to publishers shying away from footing the bill to send their authors here, but admits that “it doesn’t hurt to be the President’s bookstore.” He says a successful event, say, for a midlist author at 57th Street Books, means fifteen-to-twenty people show up. Anything fewer than ten “just doesn’t look right.” Flynn also says his bookstores have the disadvantage of being located on the South Side, as he feels it’s less likely to get a North Sider to travel south than vice versa.

“There’s a movement to place these events in bars,” he says, “so people can have a drink, and I understand that.”

Of course, hosting literary events in taverns isn’t exactly new, but it has grown in recent years. The Danny’s Reading Series, Bookslut Reading Series, RUI: Reading Under the Influence, Quickies, Orange Alert—all in bars. The desire to booze it up during these events has increased so much that even some bookstores offer alcohol to attendees at readings. “They are different kinds of readings,” says Aleksandar Hemon, who’s done the Bookslut series at Hopleaf. “People drinking beer, going in and out of the bathroom. If you have a band, and play for a small venue, there’s a spectacle in that, playing small venues where people throw beer bottles at you. Not that receiving a beer bottle is a pleasure. But there’s something about the intimacy. They do come for your reading, and if they don’t, they have beer, and can wander away and ignore you.”

Perhaps because of the dearth of touring authors at this time we’ll have more local, homegrown reading series pop up around the city, as we’ve seen with Quickies and Orange Alert, highlighting more and more Chicago talent. Poet William Allegrezza, who runs the experimental Series A in Hyde Park, says that the landscape for reading series in Chicago is “the most vibrant that it’s been in the last ten years. There are lots of series going on now. There are series all over the city.”

He continues, “There will still be big names coming through. As the economy picks up it’ll be easier and easier to get people through here. For the time being it will foster the local community…and keep the local community going strong.” 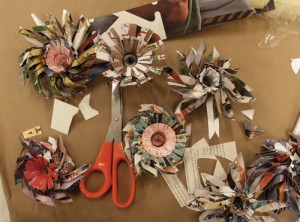 Poetry magazine’s Fred Sasaki, who organizes this Friday’s Printers’ Ball being held at Columbia College, is also optimistic about the future of readings in Chicago. “I see lots of innovation and lots of exciting changes in programming and ways to present books and literature events, so many people trying new things,” he says. Sasaki comments on the growing trend of people holding readings in their own homes and apartments, inviting authors, poets and audiences inside to engage, much like with a basement rock show or an apartment-gallery exhibit. “I think there’s a lot of love just for literary culture in the city,” he says, and notes that people are flying in from out-of-state to participate in this year’s Ball, which, in its fifth incarnation, has become one of the biggest literary parties in Chicago.

Hemon takes it one step further, hoping that the current economic situation with lead to a decentralization of the publishing world. “The New York publishing industry is losing power in many ways,” he says. “I would hope, and it’s a little farfetched, but it would result in more publishers being in Chicago.” He hopes that the local scene continues to “organize on local levels in grassroots efforts. Smaller publishers are doing it out of love for the whole thing, rather than out of the hope that they’re going to land a ‘DaVinci Code’ sort of book and make billions of dollars.”