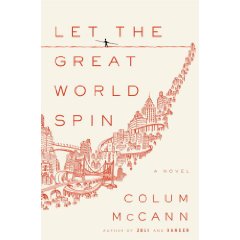 The polyphonic novel—the tale where everyone gets a say, or at least a point of view—is William Faulkner’s great legacy to twenty-first-century fiction, and its curse. For it is not enough for the author to act as a ventriloquist in such a novel. To be successful, the story must spring from a generosity of spirit, something that cannot be taught or crafted into being, and as many biographies of writers’ lives attest, may not even be evident in the author’s own life.

Irish-born novelist Colum McCann is one of the few living writers who possess this dual set of sensibilities on the page. His extraordinary 2001 novel, “Dancer,” conjured several dozen men and women who lived in the hurdling orbit of Russian dancer Rudolf Nureyev. Out of this froth of talk came a kaleidoscopic portrait of the cost of genius, of the shaggy underbelly to beauty’s performance. If you find a copy, buy it and read it—you will not regret it.

Or simply get this book, for against all odds, in “Let the Great World Spin,” McCann has managed to perform this high-wire act again. This time the setting is entirely in New York in the 1970s, and fittingly the overarching metaphor is high-wire, indeed.

The action revolves around the miraculous walk that Philippe Petit performed—there is no other word for it—on a single steel cable suspended a quarter of a mile up, in the air between the Twin Towers in August 1974.

McCann then telescopes down into the lives of characters who are, like Petit, poised above precipices, standing on grace alone, and yet flirting with danger. An Irishman in his thirties searches for his long-lost junkie brother; a well-healed doyenne of the Upper East Side nearly drowns in grief for her son, killed in Vietnam; a prostitute struggles through days deprived of any solace; a widow from Guatemala develops feelings for a man halfway around the world.

Like all McCann’s fiction, “Let the Great World Spin” is beautifully spun, dense with the intense sensuality of being in the world. His sentences enact that bit of magic that allows you to forget they are there at all, so much so that the novel slips between first and third person as if pouring water from a small jar into a much larger one.

It’s an appropriate shift for McCann to enact throughout the book. Although the novel takes its title from an Alfred Lord Tennyson poem, its great questions are spiritual rather than literary. How does one persist in the face of fate? Is there a vanity to our actions if there is a grand design?

How can a world of fragmented consciousness ever coalesce into something as whole as a city?

These are unstylish questions, but in its broad, fabulously peopled universe, “Let the Great World Spin” manages to pose such questions and almost never appears to be doing so. All we see are the intricately woven lives of people who hear these nagging concerns in the back of their minds like wordless echoes, hoping their actions form the—and only possible—answers. (John Freeman)