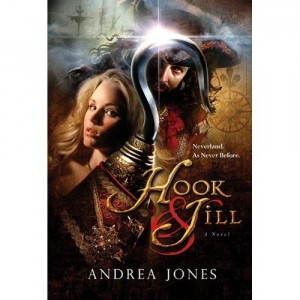 In the past few years, the more carefree and playful fictional characters of our youth have grown up.  The film industry is at the forefront of this movement, slapping the grins off the once-campy James Bond and Batman, but authors like Andrea Jones are also participating in these reimaginings.  Published last month, the local writer’s first novel, “Hook & Jill,” takes place inside the world of Peter Pan.  “It’s a new vision,” Jones says.  “It’s my own story masked in metaphor.”  Inspired by the current state of our society, this Neverland is much darker and more severe than J.M. Barrie’s original.  “What I’ve done is to bring Peter Pan into the twenty-first century,” Jones says.  The reader gets a sense of what is at stake by the novel’s second line, which reads:  “What appears to be good may prove otherwise, and what seems to be evil…is irresistible.”  “The moral is learning to think,” Jones says.  “What I’m trying to say is don’t take things at face value.  Look at the facts and make logical, rational decisions.”  Be on the lookout for Jones’ second novel, titled “Other Oceans,” which is a continuation of “Hook & Jill.”

The author reads from the book at Book Cellar on August 19.