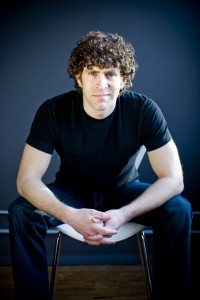 Marcus Sakey suggests we meet at the Starbucks at Clark and Belmont, just across the way from The Alley. Late afternoon on a weekday, the place is packed. Nowhere to sit, line out the door. Better idea—wanna get a beer at the L&L instead?

“Now you’re speaking my language,” he tells me, and we head over to the bar. Nobody wants to interview a crime writer in a Starbucks anyway.

Sakey grew up outside Flint, Michigan. His dad worked in the auto industry. He always loved to read and write, but didn’t study it at school. After college he landed an advertising job in Atlanta and spent years in that world, developing skills he jokingly says are “perfect for a crime novelist.” Met a girl at his office, married her.

Remember that scene in “Fight Club” when Tyler Durden turns the car into oncoming traffic and asks the passengers what they wish they would’ve done before they died? Sakey’s asking me. He says that’s what the moment was like when he decided to write books, or, at least, that’s how he would’ve answered that question. He left the advertising and marketing world, moved to Chicago and started to type.

Sakey had his first book published in 2007 by Minotaur Books. “The Blade Itself” was the first book Sakey wrote as well—no manuscripts collecting dust in a drawer somewhere—he just got lucky, met the right people, attended the right events. The book follows the lives of two childhood friends in the aftermath of a botched robbery. Chicago-set. Bridgeport. Mean and gritty, a powerful debut, great reviews. The new voice of crime, some say. Matt Damon and Ben Affleck buy the movie rights.

Two more books follow. “At the City’s Edge” looked at both the life of a discharged Iraqi vet and Chicago’s street-gang culture. “Good People,” another Chicago thriller, is about two good people who find a bunch of cash and soon have the whole world after them. Ordinary people, extraordinary circumstances—not a groundbreaking formula, but with Sakey’s sharp prose and dedication to Chicago’s shadowy corners, fun reads. Good entertainment. And more.

“I love that you can keep people deeply entertained and that you can turn the volume all the way up,” he says of the crime novel, over Old Styles. “You can use it as a crucible to test ideas and theories and people, and at the same time, hopefully entertain the hell out of someone. It’s really one of the goals. It’s as simple as that.”

Sakey’s producing of crime novels was no accident. He’s not ashamed to admit he wanted to write novels that would sell, because if you want to break into the literary world, choosing a marketable topic or genre is part of the harsh reality.

“Tell the kids at Columbia that and the temperature in the room drops ten degrees,” he says.

Sakey one-ups his less literary peers by bending the crime genre’s rules and regulations. He always wanted to work in elements of literary fiction he’s always enjoyed and his passion for lit masters comes through in his books. His influences vary from your advanced crime writers like James Ellroy and Dennis Lehane to highbrow favorites like David Foster Wallace, Cormac McCarthy, Thomas Pynchon and Philip Roth. Sakey’s plots are unpredictable and he’s doesn’t shy away from the sheer entertainment of his books; he’s even apprehensive to discuss certain plots points out of fear of spoiling it for readers. But it’s not pure pulp either—Sakey’s work is just as much about people as it is about people’s actions. Relationships. Decisions. Life.

“I think it comes down to two things,” Sakey says when asked why he thinks crime novels are so popular. “One of them is that their world is close enough to our own that we can relate to the characters, good and bad, and project ourselves into their situation. We can feel their dread and desperation as things get lousy, and we can root for them to succeed against impossible odds. If you want to get heavy on it, I don’t think it’s crazy to say that if you break them down, crime novels are fundamentally an existential exercise, a wrestling with capital-d Death. We all know that we die—some people ignore that fact with every breath, others take up skydiving. Crime novels fall in the middle, a consequence-free way to think about it obliquely. The second element is that secret reptilian part of all of us that relishes bad news, that gets an evil tingle when we hear about torture or murder. It’s not who we really are, but even though that aspect is a small percentage of a healthy person, it’s still there. And so novels about people behaving badly are the psychological equivalent of tonguing a sore. It hurts good.” 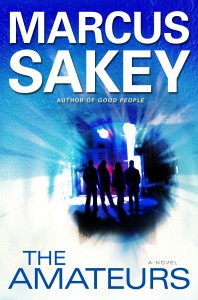 Four friends have been sold on the idea of successful American life and struggle with the results. Go to college, get a job, start a family. The road to happiness stops short. Mitch works as a doorman, Ian is a trader. Alex is a bartender whose wife has left him. Jenn, the female, is a dreamer and an adventurer, working as a travel agent, watching others escape daily. They decide to pull off a scam, to steal the bundle of cash Alex’s boss has locked away in a safe. Things go poorly. Violence ensues. The bad guys want their money back from the good guys and the danger escalates. The good guys won’t be good for long. Sakey’s characters—especially his villains—leap from the page with excessive force. Surprises abound, as the conclusion of this novel is both thrilling and completely unpredictable. There are painful developments, decisions none of his protagonist group thought they’d ever be forced to make. “I want to keep readers up late at night,” he says of his goals. “The Amateurs” kept me up really late.

When I tell Sakey this his eyes light up. “We were all raised on fairy tales of adventure,” he says. “I’m 35 years old; it’s just finally getting through my head that I won’t actually be Han Solo, that my Millennium Falcon is a ’98 Civic. One of the things that’s fun about reading crime novels is that it gives you the chance to project yourself into that role, to run a con or be a badass hitman or get the sexy bad girl. At the same time, for me it’s always important that the characters be realistic, fully-fleshed-out people. I have no interest in cowboys and Indians. I want to read about people I believe in that are faced with extraordinary circumstances, and have to deal with it.”

These circumstances that his characters face in “The Amateurs” could be best described as “consequences,” as they’ve brought this mess upon themselves. They’ve lived by the rules for their whole lives, watching the financial elite behave uncontrollably and irresponsibly and wind up with robust lifestyles. Everyone wants a piece of the pie—these characters try to get theirs. Their bitterness of being left behind in the race sparks a moral and ethical mutiny. In the real world, is this a reason one chooses a life of crime?

“I think in most cases that’s more of a rationalization after the fact,” Sakey says. “Most crime, real-life crime, comes from real-life causes: poverty, lack of opportunity, greed, fear, inebriation. I was riding with a cop one time, he said to me, ‘Thank God criminals are mostly stupid and stoned. If they were smart and sober, we’d never catch them.’ But for this novel, I wanted to play with an idea that I think most of us have had—the one-time criminal act, the get-rich-quick scheme where the only victims are people you don’t mind hurting. I think that most people have at least imagined robbing a bank. My characters just have reason to take it further.”

I read somewhere once—and you’ll have to forgive me for not being an expert on the “Harry Potter” series—that when it got to a point for J.K. Rowling to kill off one of the series’ major characters, she wept as she was writing. To this cynic, it all sounded like bullshit. Maybe she did actually shed some tears, but to me it sounds less like an overwhelming emotional experience and more like a writer too involved with herself rapidly typing to meet the twilight of crazy hour. Sakey’s characters, in all his books, go through some awful ordeals, but he keeps a grounded head on his shoulders. It’s not difficult for him to put them through pain.

“Not if I feel like I’ve managed to write them well, and the things that are happening to them are sensible and logical and right on the storytelling level,” he says. “It’s crucial to me to write developed and believable characters, but if you start thinking they’re actually people, it’s time to adjust your dosage.”

Perhaps those roots in reality are what helped Sakey reach success so quickly. The crime novel was a deliberately chosen path, of course, but also his dedication to research—which, in the past, included him strapping on a bullet-proof vest and doing a ride-along with Chicago police—lends his work a level of authenticity. A writer living in a dreamland all day long couldn’t write “The Amateurs.” Perhaps, in that writer’s version, the four friends escape the carnage without a scratch. 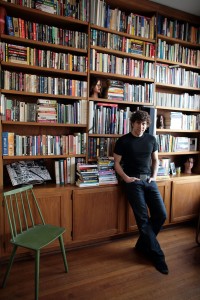 “I enjoy the act of reading in public, but I think it puts people in a complacent place,” Sakey says. “I think it’s more fun for all of us if we’re chatting.”

A few hours after we part from the L&L—Sakey trotting down Clark street to his Lakeview home, which he and his wife have lived in for years—we meet up again at Sheffield’s Beer and Wine Garden for the launch party for “The Amateurs.” He’s doing exactly that—chatting—with friends, family, fans, the support system that has nurtured him for years. His parents have traveled down to help celebrate; Sakey bounces around the room greeting each attendee. He thanks them. Handshakes, hugs. It’s his party, but it looks exhausting.

Two hours earlier he told me that while he doesn’t seek it out, he doesn’t mind being the center of attention. It seems to suit him. Sakey’s handsome, with a Hollywood smile and a thick head of curly hair that ain’t going anywhere any time soon. While plenty of authors are introverted and shy, Sakey’s charismatic and inviting. He could’ve been an actor—he probably killed in the advertising world.

His books have done well enough to award him a full-time-writer lifestyle, but a grueling one that requires Sakey to write 5,000 words a week in order to meet his current one-book-a-year contract obligation. (He owes two more after “The Amateurs.”) All three novels before this new one have been optioned in Hollywood, but Sakey remains basically uninvolved. They keep him updated on developments, which he says is exciting, “But it’s like hearing good news about a distant relative.”

Sakey’s part of a local crew of crime authors—like Laura Caldwell, Sean Chercover, Kevin Guilfoile—who are giving Chicago a serious name in the crime-novel business. In fact, they all keep up a blog together, at theoutfitcollective.blogspot.com. In the way that Elmore Leonard has Florida and Detroit, James Ellroy has Los Angeles, Dennis Lehane has Boston and James Lee Burke has New Orleans, Sakey has Chicago. And while on tour, he’s asked about it often.

“You always get, ‘Oh, Chicago, Al Capone,’” he says. “There’s often a reappraising look, like they didn’t realize you were quite so hard. Personally, I love it, but it’s funny that it hangs on. However, lately I’ve noticed that the second thing they say is ‘Obama.’”