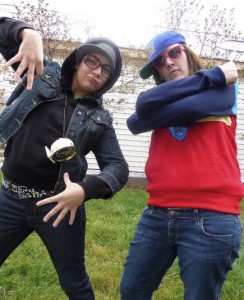 “That was a great warm-up, now you can start on the novel.” That’s what Mary Hamilton and Lindsay Hunter heard most often during their critiques in the writing program at the School of the Art Institute of Chicago. Ranging between one and three pages of text, flash fiction is among the shortest forms of fiction writing. Famous Chicago natives like Ernest Hemingway pushed it even further with his six-word story, “For sale: baby shoes, never worn,” which now ranks as the shortest piece of short fiction ever penned.

But what makes flash fiction different from other forms of fiction is not just length, but how the story itself builds up. “Flash fiction eliminates all the window-staring and gets down to the moment,” Hunter explains. “It’s easy to go on for pages, but it’s not easy to inhabit the moment where something is really happening. Flash fiction is like writing in the moment and being thrifty with the word choice.” It’s a common misconception for people to think that flash fiction is a sketch for a longer piece. “If you gave me ten stories I’d cut the last sentence out of nine of them at least.” The trick with flash fiction is that it “starts at the crest and ends at the climb,” Hunter adds. “Its not like getting on the roller coaster up to that never-ending climb where you’ve crested, you’ve looked how far the drop is and taken the plunge then unbuckled yourself from your seat. Flash fiction denies the drop.”

Hunter and Hamilton met in the writing program in what they describe as “love at first sight.” Sharing their frustrations over how hard it was to convince some that flash fiction is a serious form, and that readings don’t need to be painful and long to be good, they decided to create a space to showcase new flash fiction. The Quickies! Reading Series came into being during December of 2007, when on a horrific business trip, and working into the early hours of the morning in a strange town, Hunter says, “I needed something else to happen in my life that had nothing to do with what I hated and everything to do with what I loved.”

Taking a cue from New York’s starstruck Ritalin reading series, infamous for its punchy short comedy lineup, Hamilton and Hunter put their heads together and looked to online short-story publications like Smokelong, Monkeybicycle, SleepingFish and others before they begun contacting Chicago and online writers they knew and loved asking them to participate. With the help of Chicago’s Todd Dills, the founder of 2ndhand, they sent blind solicitation letters to Chicago talents whose writing style seemed a good fit for the short form. Stories from Chicago writers like Jill Summers, Mary Cross, Zach Plague, Margaret Chapman, Jac Jemc and others that are often featured in the works of Chicago publishing house featherproof, edited by another Quickies reader, Jonathan Messinger.

Quickies! cumulates around Chicago-based writers from Columbia College and School of the Art Institute writing programs. The rules are simple: “Each reader has five minutes to read a complete work of prose. No poetry. No excerpts. No cheating.” Hunter and Hamilton admit that so far they only had to get a bouncer to drag a reader off the stage once, though “I really don’t think those people knew how serious Mary and I were about getting people off the stage at the five-minute mark. I think it still surprises newcomers.”

Hamilton just returned from the The Dollar Store Summer Tour, where she represented the Quickies! reading series in a two-week trip to eleven cities all over America, and they hosted this year’s Printers Ball reading series face-off. Though Quickies! doesn’t accept regular submissions for their readers, they just opened a fiction contest, where twice a year new flash-fiction writers will be given a chance to wrestle their talents for a reading spot. The mission, writes Hamilton: “I somehow want to incorporate the next season of ‘America’s Next Top Model’ into Quickies,” explains Hamilton, “because, you know, it’s the season with the short models (5’7″ and under) and it’s all like, just because they’re short, doesn’t mean they’re not pretty!” (Beatrice Smigasiewicz)