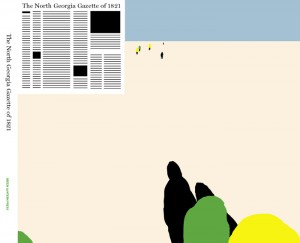 When resurrecting a piece of writing predating the Civil War, precautions must be taken to maintain the genuine message of its words. So when Green Lantern Press decided to reissue a publication about a sea voyage during the winter of 1819-1820, they took it to a whole new level.

“The North Georgia Gazette and Winter Chronicle” came into Green Lantern’s hands as a weathered yellowing pile of newspaper pages still holding the dust and mold from almost 200 years ago. From there, the transformation became a polished and readable bound edition of a piece of history. The editors of the Gazette had to figure out their goal as far as how they were going to bring back this moment in time. Did they want to replicate the original experience or make it something completely fresh? By the time it was finished, the revised edition was aesthetically modern while keeping the heart of a work created generations ago.

The collection of journal entries, captain’s logs, letters, poetry, short fiction and visual art chronicles the expedition of ships HECLA and GRIPER as they traveled in search of a North-West Passage from the Atlantic to the Pacific Ocean. Commanded by Lieutenant William Edward Parry, the ships and their crew of nearly a hundred men traveled through vast seas of ice, temperatures never exceeding sixteen degrees Fahrenheit, before anchoring in the Arctic for the long and dark winter to come.

During this time of the year in the Arctic, the sun fails to rise above the horizon for nearly three months, making the time spent waiting less than cheerful. Along with usual shipboard duties, the crew members produced and performed plays as well as created sets and costumes. In conjunction, there was to be a weekly newspaper titled The North Georgia Gazette and Winter Chronicle which held contributions from officers of the two ships. “Writing the newspaper was a way for the officers to take care of their men viz. entertainment. It’s kind of like the Gazette is like a very old-timey Onion, but in the middle of nowhere,” says Caroline Picard of Green Lantern Press. The idea for the re-pressing sprouted after she discovered a book called “Arctic Dreams” by Barry Lopez and, among other things, he mentions the Gazette. I asked Caroline a few questions about why she believes this anthology is relevant to today’s readers.

The Green Lantern Press puts out a diverse selection of works. How is this different from previously published efforts?

The North Georgia Gazette is definitely the first book we’ve published that’s been a reprint and while we’ve always been interested in combining past and contemporary writing, and creating opportunities to provide an experience of integrating mediums (i.e. visual art, music, writing), this is the first book that we’ve published where all of those intersections have been accessible at one, in the same piece.

This could be described as an adventure piece. Why do you think readers are so interested in exploration?

Oh man. Because it’s baddass? I don’t know. I guess maybe, for me, it’s because the sense of exploration used to have to do with accessing an exotic world. Old James Bond movies, for instance, portray a world that’s exotic, with little-known cultures, customs and technological gadgets and whatever else becomes accessible to the viewer. Or Jacques Cousteau. It seems like, in this day and age, our collective sense for the exotic has been lost. In consequence our sense of “adventure” is much smaller than it once was, i.e. there is less risk. One can pay money to go to the moon and keep a blog about, or travel through the Amazon on a boat etc. There are very few inaccessible places in the world. I think the Gazette, particularly coupled with John Huston’s contribution, reinvigorates that sense of the exotic. Through the newspaper I think it’s kind of a nostalgic experience and that’s significant because those remote parts of the world are not-so-slowly disappearing or melting.

The collection has a lot to do with “cabin fever” or general boredom at sea. How do you think this idea translates into today’s struggle to keep one’s sanity?

I guess I think about it as a situation in which people have to construct their philosophical structures to survive. I think that happens in any situation to varying degrees. The larger the consensus within a population, the more difficult it is to recognize that any structure has been implemented. The situation with the North Georgia Gazette is just a very extreme version of that situation and therefore, hopefully, it makes the artificial constructions of meaning more transparent. I was fascinated by the situation because it reminded me of Plato’s cave.