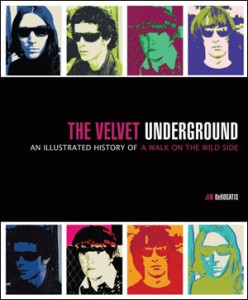 ” The Velvet Underground: A Walk on the Wild Side,” an illustrated history of the band written by Jim DeRogatis and several other contributors, features a balance between text and bundles of photos, flyers, lyric sheets, album covers and VU memorabilia, and attempts to tell the tale of the fabled group, with mixed results. The Velvet Underground members—young punks in art black—looked cool, so it makes sense to feature lots of photos of the band doing just that. Andy Warhol was there, and Nico was beautiful and mysterious. Edie Sedgwick did some dancing or something. It was a scene, man. The old flyers promoting concerts are neat as well, as is the Verve promotional shot of the band—it’s hard to imagine The Velvet Underground taking press photos and needing flyers to hype up its shows, the group’s been mythologized so passionately one assumes they didn’t have to work very hard.

But that’s all just eye candy. The limited text featured here includes some rare interview material and attempts to explain the band’s overall importance, but it’s a rather minor look into the band’s life and the tensions and troubles between the band members that’s known moderately among the public. Halfway through the book, one wishes for a 500-page comprehensive study of the band, not what is essentially a slideshow with brief commentary that doesn’t quite explain why The Velvet Underground was so important, so inventive, such a game-changer. An entire book could be written about Moe Tucker’s unorthodox drumkit alone—not to mention Lou Reed’s, ahem, prickliness. (And another thing—the title, “A Walk on the Wild Side,” is stupid. The song may or may not have been written about the people in the scene at the time, but it was a solo Lou Reed track, not a Velvet Underground tune, and the reference to it here comes off cheap and obvious.)

The artwork for the book makes it fit for a coffeetable, and its spine will look nice sprouting from a shelf. There’s little more you’d learn in here than what you’d take from a cursory glance at the band’s Wikipedia page, but maybe that’s just how it should be with this band. If you really want to know, put on one of the records. (Tom Lynch)

“The Velvet Underground: An Illustrated History of A Walk on the Wild Side,”
By Jim DeRogatis
Voyageur Press, $30, 192 pages