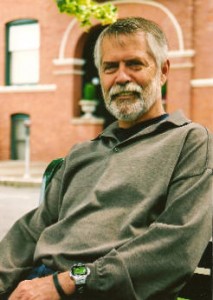 The skies overhead are an oppressive grey twilight, reminiscent of a time when books were routinely censored for any hint of subversive content within. Yet, now is a time of celebration. September 26 marks the beginning of Banned Books Week. As such, the American Library Association (ALA) holds an annual banned-books read-out. Hosting the event is Chris Crutcher, author of “Running Loose” and “Athletic Shorts,” both of which have been on the ALA’s 100 most challenged books (1990-1999). While the possibility of rain lingers, readers are mostly cheerful and irreverent.

Sirens sound off in the distance during one reading, a sobering reminder of the reality every fiction writer tries to recreate in their own way. It’s this verisimilitude that often gets authors into trouble. Sarah S. Brannen reads her most recent work, “Uncle Bobby’s Wedding,” a children’s book revolving around the same-sex marriage of two guinea pigs. “Wow, that’s really offensive,” says one facetious audience member. Despite the liberal sensibilities of this crowd, the book sparked controversy in Colorado and made ALA’s list last year. “I guess some parts of the country don’t want children exposed to two adult characters who love each other and want to raise a family,” says Brannen.

A somber but uplifting tribute is paid to First Amendment advocate and longtime ALA Office of Intellectual Freedom director, the late Judith Krug, a woman who often said, “Censorship dies in the light of day.” And with this, the sun reluctantly peeks through a dense layer of clouds, the light glaring off the windows of Newberry Library across the street. (David Stockdale)