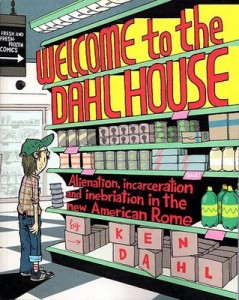 The flier offers readings, sellings and most promising of all, human interaction for fine comic book readers—a novel concept in the age of texting and tweeting. Technology aims to bring us together, and yet it works to isolate us. The 2009 Punchbuggy Tour has hit its Chicago leg. Featuring Liz Baillie (“My Brain Hurts,” “Freewheel”), Ken Dahl (“Welcome To The Dahl House,” “Monster”) and MK Reed (“Cross Country,” Americus”), the tour features original readings and book signings.

Chicago is the ninth stop for the irreverent trio. A modest thirty minutes late, Dahl arms himself with a banjo. Baillie has a ukulele. Something’s not right here. Is this a show? “Somewhere along the way we developed a bit of apathy,” says Dahl. “So we added a soundtrack to the readings.” Indeed, the stringed authors provide a folksy twang to the readings. The music adds an exclamation point to the stories. Taking frequent beer breaks, the speakers seem to have a knack for creating an intimate reading space.

Reed fiddles with the computer, and presents a selection from her graphic novel “Cross Country.” Baillie begins her readings, humbly warning, “Mine’s not as funny as theirs,” though it proves entertaining enough. Dahl reads an excerpt from his latest work, “Monster,” a graphic novel about a man humorously stricken with herpes. At Dahl’s cue, Baillie lets out a monstrous burp. This reading has surround sound. (David Stockdale)