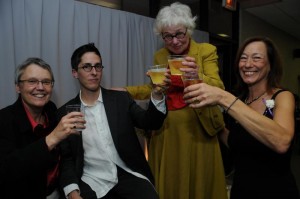 The third floor of The Breakers at Edgewater Beach is bustling with energy during Women and Children First’s 30th Anniversary Celebration & Benefit. Store owners Linda Bubon and Ann Christophersen chat with the many women (and men) who have supported the bookstore over the past three decades as they dine and await speeches from keynote speakers Alison Bechdel and Dorothy Allison. Yet even though the party goes off without a hitch, their work isn’t even close to being finished. “I’m more sure than ever that we are in the middle of things, thirty years is nothing. It’s just a start on all of the work that needs to be done… there are a lot of the same issues that we’ve been working on for thirty, forty, fifty years and they are still with us,” says Bubon.

When walking into the feminist bookstore located in Andersonville, it’s understandable how a place like this could last thirty years, because there isn’t anything else quite like it in Chicago, with an inviting atmosphere that’s both welcoming to first-timers and keeps regulars coming back. This is exactly the kind of place that Bubon and Christophersen were hoping to create back in November 1979.

The pair met while studying literature in graduate school at the University of Illinois at Chicago. The initial idea of starting up a feminist bookstore came about as a way to find meaningful employment while staying true to their values and to create a space where the work of female writers could thrive. “This was a motivation for us and the story that we often tell is that we just couldn’t find women writers or much of a selection of women writers at so-called general bookstores,” says Christophersen. Though both Bubon and Christophersen felt fulfilled in running Women and Children First, they never expected it to become their life’s work. “I didn’t know that thirty years later that I would still be working towards equality for women,” says Bubon. “We thought that we were stuck there for a little bit and then the women’s movement came along and we were making all of these strides and by the mid-eighties all of these bookstores would be carrying these great women writers and that didn’t happen.”

Although women writers have made incredible strides in the literary world over the past three decades, a sizable amount of the work that is lauded by critics and carried by chain bookstores is, more often than not, still written by male authors. “The truth is that women’s literary work, though it has come a long way, is still not on par with men’s. It’s not treated as seriously—you can look at the New York Times, and who’s reviewed—and it is impossible not to notice that the balance is still heavily male,” says Christophersen. “Women writers still need to find a place where their work is featured and new writers get their chance to come to the fore and start the process of finding an audience.”

Over the years, everyone from Gloria Steinem to Maya Angelou have read to packed houses at Women and Children First, but Bubon and Christophersen have always championed local authors—especially those first starting out—by providing them with an opportunity to find their niche. Sandra Cisneros, Achy Obejas, Sara Paretsky, Ana Castillo and Audrey Niffenegger are only a handful of the local writers who have been featured. “It’s been our privilege to host hundreds of Chicago women authors, poets, fiction writers, nonfiction writers, the whole range,” says Christophersen.

Though Women and Children First has successfully fostered its community over the past three decades, there have been challenges along the way.

In 2007 the store faced a financial crisis, due to competition from behemoths like Amazon and a stalling economy. On the verge of closing, Bubon and Christophersen turned to the store’s patrons and asked for help. “People just think ‘The store looks great, they’re doing fine, they’ll be here forever,’ and just get complacent or make assumptions that the appearance belies the reality,” says Christophersen. The tremendous outpouring allowed the store to surpass the previous year’s profits—for the first time in five years.

Even though the store is still facing financial challenges due to the current economic downturn, Bubon and Christophersen are keeping an eye on what’s ahead. Over the past few years, Women and Children First has sold a selection of e-books and is currently planning to expand upon their collection within the next month. While they have embraced the digital trends in the publishing industry, Christophersen still hopes that independent bookstores will still remain valuable well into the future. “We think so much of what’s important is not so much the act of acquiring a book, but of being surrounded by books,” says Christophersen. “I learn as much about books from talking to customers and overhearing customers talking to each other. Certainly my fervent hope is that bookstores have a long life ahead of them, but who can predict.”