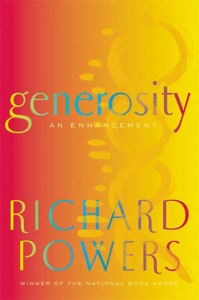 Richard Powers’ fascination with the possibilities and idiosyncrasies of the advancement of technology—and the convergence of science and art—continues with “Generosity, ” his stimulating, if brisk, follow-up to the National Book Award-winning “The Echo Maker.” The author lays the foundation for his work in a fictional, slightly surreal Chicago, where familial streets travel in unfamiliar directions, a talk-show host named Oona is described as the most powerful woman in the world and Russell Stone, a frumpy writer and evening-class college instructor, becomes fascinated with one of his students and her beaming optimism. Thassadit Amzwar, a Berber Algerian who lost her family in the Algerian civil war, possesses an unflinching, unwavering happiness that captivates all she encounters. The “hyperthymia” term is tossed around, while elsewhere, a geneticist works doggedly to isolate, and understand, specific genes. Narratives entwine, and Powers quickly reaches his central question: what if there were a gene for happiness?

Powers is as perplexed and intrigued by Thassa as his characters are; he tests her limits by cursing her with a tragic past and, in the present, has an overwhelmed classmate attempt to rape her. Thassa’s unending cheerfulness brings the world to her—a science journalist has her dead in her sights as she gains strange celebrity as the happy girl. She attracts fans that send her emails with odd requests.

Powers’ unique use of language works, as it has throughout all his books, as both his crutch and his pitfall. His weaving of scientific knowledge and character-driven melodrama sweeps as smoothly as ever in this book, his tenth. The reader isn’t intimidated by Powers’ usual canyon of knowledge and terminology. (Remember the head-scratcher passages in “The Echo Maker”?) However, especially in “Generosity,” Powers can get overly cute. He sprinkles a handful of useful and not-so-useful threads of metaphysical writing in which he’s essentially narrating the story, but even he himself isn’t confident with the details. “Over date pudding, she tells him about negativity bias,” Powers writers, but then, “I’m not really sure if she tells him this over date pudding, of course, or even if she tells him at this lunch at all. But she tells him, at some point, early on.” That, coupled with some overzealous description—“His shoulders apologize for taking up any public space at atll”—can send some eyes rolling.

But “Generosity” doesn’t waver in its curiosity, and despite lacking the resonance of his masterwork “The Echo Maker,” Powers has crafted yet another daring, insightful story. It could have been a classic, if only it wasn’t so damn smart. (Tom Lynch)