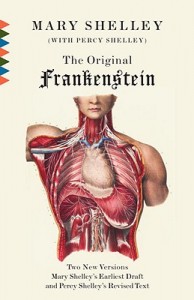 A minority of literary historians have, over time, advanced the claim that Mary Shelley did not actually write the classic “Frankenstein,” and that her husband, Percy, simply dictated it to her. Others believe that the two collaborated on the book together—originally published anonymously in 1818—and that Mary, only 18 at the time of the book’s writing, was too young to have written a book of such imagination and grotesqueness. (Also, Mary’s being female played a part in the doubt, which is of course terribly sexist, but we’ll let that go for now.) As a study, Charles E. Robinson presents two versions of the novel, Mary Shelley’s “Frankenstein” as she wrote it, and a version of the book that includes Percy’s edits and additions, a manuscript that was obtained by Oxford’s Bodleian Library in 2004 after it secured the Shelley family papers. Overall, Percy’s contributions amount to only 5,000 words out of an overall 72,000, but change the novel, and its tone, dramatically.

I should admit that I’ve never been a particularly huge fan of “Frankenstein.” Preferring Bram Stoker’s “Dracula,” I’ve always felt “Frankenstein” is depressing and strangely unfair, features rather irredeemable characters, is obvious and, at the risk of sounding amateurish, is deathly boring. Shelley’s punishing of nearly all the characters seems dementedly cruel, as if savagely butchering everyone in sight was a way to keep herself entertained. In the version written by Mary Shelley (with Percy Shelley), Robinson bluntly inserts Percy’s additions in italics within Mary’s text—a word here, a sentence there, rarely an entire passage. Reading the new version with the insertions is distracting, but I can’t think of another realistic way he could’ve presented it.

Percy Shelley’s version, more akin to what’s become a modern interpretation of the work, makes Frankenstein’s monster more human, with more emotions and grief, a more tragic figure than Mary’s murderous beast. The language is also elevated; Mary’s style, more straightforward and brisk, is beefed up with snippets of sprawling text. It doesn’t add very much, but makes the novel flow a bit better. The story itself doesn’t change much, plot-wise, but the monster’s loneliness—which in fairness comes through in both versions—feels much more debilitating here.

Problem is, who cares? Mary Shelley’s warning against irresponsible advancement in science essentially remains unaltered, the monster is still a monster and Frankenstein treks along as a silly, unsympathetic character. Charles E. Robinson’s work is commendable, laborious and, ultimately, kinda cool, but the story of “Frankenstein”‘s writing has become more interesting than “Frankenstein” itself. This dual-version edition is for historians and Shelley geeks, as well as patient super-fans of “Frankenstein” that’ll take anything new. (Tom Lynch)