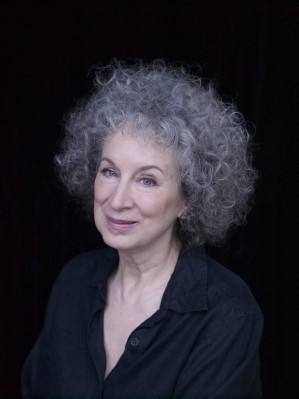 “I have some that I classify as to whether or not they’d make good murder weapons, ” Margaret Atwood quips when asked about the many awards, among them the Booker Prize, that have graced her forty-year career as a novelist.  The celebrated Canadian author is on the road in the United States promoting her latest novel, “The Year of the Flood,” and speaking by phone from her hotel room in Washington, D.C., just a few hours prior to that evening’s events.  “The Dashiell Hammett Award, which is just beautiful, is a little thin man cast in bronze with the head of a falcon, and I keep that on my desk as it does look like one of the Egyptian gods. But there’s [another] one that’s sort of a plexiglass pointy thing, and that would be my weapon of choice.” The almost septuagenarian—Atwood turns 70 on the eighteenth of this month—responds to this reporter’s laughter with a mischievous chuckle, waits a beat and then goes in for the kill. “Well, I didn’t win the Dashiell Hammett Award for nothing.”

Could this be the same author whose novels have envisioned nightmarish dystopian views for the human race, as in 1985’s “The Handmaid’s Tale” and currently “The Year of the Flood” (a second book in a planned trilogy that began with “Oryx and Crake” in 2003)?  The same Atwood whose dark thematic threads have included prostitution, rape and the abandonment of children by mothers?

“She gets this rep for being very serious,” says Anne Clark Bartlett, English Department chair and professor at DePaul University.  “A recent article said something about her [Atwood] having a ‘pitiless’ eye.  And while she doesn’t take any prisoners or suffer fools, I think happily she has a hilarious sense of humor and a real knack for physical comedy.”  A self-confessed “Margaret Atwood fiend,” Bartlett, whose throaty laugh and frequent use of the words “cool” and “yeah” in conversation belie her 48 years (“Mentally, I’m 29” she jokes), considers Atwood a literary “rock star.” “She’s a larger-than-life force, her vista is so vast, and her gaze is so penetrating. She’s always made the bold step, and she’s always taken on the subjects that are huge, like rape. Still, this is a big risk for her.”

The risk to which Bartlett refers is the performance that will end up on the stage of DePaul’s Merle Reskin Theatre Friday evening.  Atwood will act as “narrator,” reading passages from “The Year of the Flood,” and DePaul faculty members (including Bartlett, who describes her upcoming acting debut as “remotely terrifying”) will bring to life the novel’s main characters through excerpts that dramatize some of the book’s conflicts. (The “flood” of the title is actually a waterless plague that has wiped out the human race, and the 400-page story concerns its scattered survivors on a quest to find one another.)  A choir will belt out California singer-songwriter Orville Stoeber’s original score (music and lyrics) inspired by and produced for the novel (and available as a recording), and an imaginative set—leftover from a children’s play running daytimes in the Merle Reskin—will offer Chicago audiences a Technicolor-mountain backdrop to the imaginative proceedings. In other words, there’s risk, like the kind involved when any writer embarks on a public-speaking book tour. And then there’s risk, like being 69 years old and signing on to an “all-singing, all-acting” book-tour-cum-musical-radio-play-dramatization-performance-piece.

Of course, Atwood makes it sound simple, and humorous. “It’s like Mr. Potato Head. You send whoever’s putting it on the script and the music and then they interpret it any way they want.”  Indeed, from Edinburgh, Scotland, (where the tour started) to Ottawa, Canada to Boston, Massachusetts, this “hybrid book tour” (Ms. Atwood’s preferred moniker) has proved a chameleon of a show limited only by its presenters’ rich imaginations and a suggestion or two from Ms. Atwood and Mr. Stoeber, who arrive a day early to work with the cast and crew in each city, thus minimizing the tour’s “carbon footprint” and staying true to the author’s environmentalist roots. It’s been performed by seasoned pros, by young schoolgirls and in one instance by a “company” that consisted of two bookstore workers and a customer (“It went fine,” swears Atwood). It’s been seen in magnificent cathedrals, intimate churches and old movie houses, with decorations and without, and sometimes with costumes or just evening wear. In other words, the Merle Reskin performance will be unique, or as Atwood puts it, “The Chicago show will be the Chicago show and it won’t be seen anywhere else.” And although “Flood” tour events will continue throughout the year before wrapping up in Canada in December, Chicago will be the last of the musical and dramatic hybrid presentations. “So last-chance saloon! Catch it now or that’s it, folks,” trumpets Atwood. 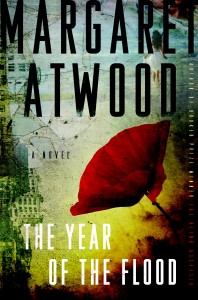 When Atwood doesn’t sound like a one-woman PR firm, she sounds like a one-woman merchandising machine.  Like a favorite aunt who is telling you that you’re much too thin and really should eat, Atwood suggests to me, “You really need to have the CD. Have you got the CD? You could probably get it at your local Barnes and Noble. Or got to my web site.”  On that site (www.yearoftheflood.com), one can also obtain ringtones, T-shirts and tote bags related to “Flood” (“Isn’t that funny?” Atwood asks, rhetorically.) But it’s all for a good cause. As she described in an August 2009 essay for the Times of London (available online), proceeds from this tour will benefit BirdLife International and its global subsidiaries, and raising awareness for this and other environmental causes was the driving force for undertaking this risky, ambitious and demanding endeavor.

Spreading the “green” Gospel may also explain why the 69-year-old writer has picked up Blogger and Twitter like gangbusters, writing about the tour from city to city and offering a backstage pass to all the circuses. “Do you know how many followers I suddenly have? My new best friends? Starting cold from August I’ve now got 10,200 and counting,” she says with the glee of a kid in a candy store.  When asked if she’s familiar with the Facebook page “Margaret Atwood is Awesome,” however, she confesses, “My goodness. Well, I’m afraid to look at it. I’ve never gone on Facebook.” And will she feel the need, as an author in the twenty-first century, to stick with the blogging and tweeting?  “I’m not sure about that. I’m old enough so I could just dump the whole thing and say forget it.” But where would this leave her 10,200 “new best friends”? She considers this a moment, before declaring with a laugh, “No, no, I couldn’t dump them. I mean, you’re stuck with them. I’ll have to keep up.”