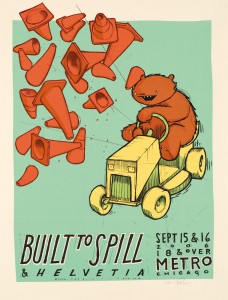 There may be plenty of people in this world who ignore the everyday reality that burdens the rest of us, who see and describe things as they choose, often with the assistance of irresistably cute animals, but most are locked up, not making a living off it. Chicago artist and printmaker Jay Ryan, of The Bird Machine, not only makes a living off making up his own world, he makes the rest of us want to live in it. His rock posters and other commissions rarely make any literal connection to the band or subject matter at hand, but there’s a method to his madness. Well sometimes. Consider this description of one poster for a Stnnng/Dianogah double bill in Minneapolis, from his forthcoming book on the Akashic imprint, “Animals and Objects In and Out of Water: Posters by  Jay Ryan, 2006-2008”: “I was building a new bike while making this print, so I drew a bike. Then I drew a fat man being thrown from the bike, but replaced him with a dolphin, but soon felt the dolphin didn’t fill the space appropriately, and didn’t really make sense, anyway. I replaced the dolphin with an icthyosaurus, and added a toaster to tie the whole composition together.” Who needs coherence when Ryan’s image combines his singular warm style with graphic and typographic virtuousity in such a way that you see the picture, and the band name, and somewhere, deep inside, a voice says, “Exactly. Perfect.” For this second monograph of his artwork, Ryan’s enlisted the services of fellow traffickers in enlightened insanity, the writer Joe Meno, who contributes a short biographical essay about Ryan that gives new meaning to “unreliable narrator,” and editor (and Newcity contributor) Fred Sasaki, whose brilliantly unhinged mind leaves its cortex prints all over this book. Animals on bicycles make sense, don’t they? (Brian Hieggelke)

Jay Ryan will discuss his work at Quimby’s, 1854 West North Avenue, on November 11 at 7pm, along with comics maker Paul Hornschemeier, who’s just released “All and Sundry: Uncollected Work, 2004-2009.”