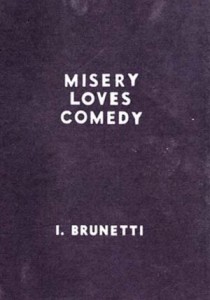 A crisp, lively fall afternoon with a brilliant blue sky, and comics artist Ivan Brunetti’s book signing has been going surprisingly—given his cult status among comic lovers—slowly. “A Columbia College student was here earlier filming [for her documentary] and she was like, ‘This was a bad idea,’” he says.

“No, actually I said that,” he adds, the comic equivalent of burnt toast.

A short stack of unsigned books rest on the table, while behind it, there is no line to speak of. Over the next hour a handful of fans, all of who seem to know Brunetti personally, trickle in at widely spaced intervals.

But cozy looking and brightly lit, Third Coast Comics is inviting to the passerby; though this isn’t typical with most comic shops, owner Terry Gant points out. Most comic stores are “not inviting to normal people, “ he says, but entering Third Coast “feels like your stepping into a book store, not an opium den.”

Just as Third Coast with its debonair light fixtures and brightly painted walls isn’t your typical comic book store, Brunetti is not your typical misanthrope. Though his work often depicts crude, violent scenarios, including two books dedicated to “the worst things I could think of,” his manner seems unexpected. Kind, open and emotionally honest, Brunetti manages to touch on the gross, inane and despicable facets of humanity, all the while preserving his own. “Drawing keeps me from killing myself,” he says, “but I certainly don’t expect it to be entertaining to other people.” To anyone who’s experienced self-doubt, depression, self-consciousness and general existential crises, Brunetti’s work might resonate, if not in its sadness than with a chuckle of recognition.

I have no book to be signed, so I ask Brunetti to draw me a comic on a fresh sheet of notebook paper. As is his tendency, he pens a self-portrait, but this one is devoid of the feverous self-loathing found in his earlier works (“Schizo,” for example: a corrosive, gut-wrenching autobiography in comic strips) Of his chosen medium, Brunetti says “I like paper drawing in that it’s static. How you can create a sense of life in that very static, limited space.”

The paper and ink Brunetti stands in front of the backdrop of a city, finally settling on a peaceful reflection of his past work. “I was an organism who existed at a certain time and this is what it felt like,” reads the speech bubble. “Or something like that.” Trying, as so many artists do, to communicate what it is to be a human being. (Emily Torem)