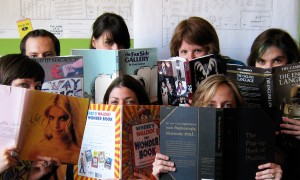 “More than fifty percent of the people in our city have low or limited literacy skills,” says Erin Walter, Literacy Director of Open Books in Chicago. “And sixty-one percent of low-income families nationwide have no children’s books at home.” Walter sits alongside Becca Keaty, Director of Marketing and Public Relations, and Stacy Ratner, Executive Director, in the soon-to-be-opened bookstore, which will house between 40,000 and 50,000 books by its grand opening November 21-22.

The store’s multicolored walls with inspirational and clever quotes like “He that loves reading has everything within his reach” resemble a painting of easter eggs, and ubiquitous shelves of purple, orange, green, pink and blue stand in ordered chaos, all of which can hold up to 60,000 books in total. In the children’s section, which is divided off by a standalone wall built to look like the front of a house, book clouds—donated books that have been painted to look like clouds in the sky—hang from a cerulean ceiling. A faux fireplace lounge hosts a wall covered by tiles purchased, customized and donated by both volunteers and by others who support the literary venture of Open Books.

What, exactly, is Open Books? “It’s a social venture,” Ratner says. “We’re nonprofit, so we’re dependent on charitable ways of giving. The second thing is that it’s a public space to make illiteracy an issue. It’s a big, colorful, creative, collaborative space for all levels.” Open Books houses four literacy programs: Open Books Buddies, a one-on-one reading program in elementary schools in Chicago and Evanston; Adventures in Creative Writing, creative-writing workshops for grades four through twelve held at Open Books, an “all-nonfiction-based idea to get these kids to share their personal stories,” says Walter; VWrite, mentoring programs for teens who are matched one-on-one with professionals in the city for college and career writing (résumés, personal essays, etc.); and WeWrite, a program for adults and the occasional teenager who’s extra motivated. “We have forty-five adults and teens from all over coming here to write,” Ratner says. “The grand opening lets us take all of our programs to the next level.”

The Open Books mission began three-and-a-half years ago in Ratner’s basement, when just she and Keaty were collecting donated books with the goal of becoming a nonprofit organization. “It took a year to get 501c3 status,” Ratner says. “We opened in May of 2006 and got the status in June of 2007.” In all this time, those at the forefront of the mission have collected tens of thousands of books ready to be sold to voracious readers from all over. “Lots of bookstores are closing,” Walter says, “and we hope to support those people who feel they’ve lost their bookstore.”

“We also decided we’re gonna be selling books online,” Keaty adds. “Some will sell in the store and some will sell better online, so we’re doing our best to maximize on that.” With any luck, book sales will garner the attention of readers and writers alike looking for a place to call home or even just pleasantly pass through. “Hopefully we’ll put Open Books on the map for authors who are coming through Chicago to promote their books,” Keaty says. Authors that will appear at the grand opening include Joe Meno, Marcus Sakey, James Kennedy and Kristy Bowen, all representing their own panels of Young Adult, Mystery/Thriller and Poetry writing.

The bookstore is a means to help fund the cost of Open Books’ literacy programs, the heart of their concerns. They’re partnering with and getting volunteers from more than literacy organizations in the Chicago area, including Story Bus, Young Chicago Authors, Steppenwolf Theatre, Christopher House and Sit Stay Read. “Really we have no barriers, I would say, when it comes to finding ways to support the cause,” says Walter.

Open Books will open its doors November 21-22 at 213 West Institute Place. More information on the weekend’s events can be found at open-books.org.