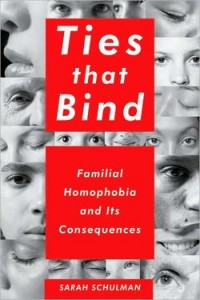 Author, activist and journalist Sarah Schulman first made a name for herself in the early eighties in The Village Voice as an early reporter of the AIDS epidemic in America. Novels, nonfiction books and plays followed, and while Schulman’s material dealt predominantly with gay and lesbian issues, she also very much established herself as New York voice.

In her new book, the slim and insightful “Ties That Bind: Familial Homophobia and Its Consequences,” Schulman discusses that, despite gay “awareness” being on the rise with each passing day, homophobia, and its starts-in-the-home roots, continues to march on. Schulman argues that the familial discrimination suffered by many gays and lesbians leads to entire lives of abuse acceptance—the origin of the exclusion, like many things, begins with the family’s response to a loved one’s homosexuality. On the flipside, the abusive treatment, for the perpetrators, paves the road for a lifetime of intolerance and hate, and Schulman argues that the anti-gay rhetoric and position, because it’s sometimes so blatant in the “family” institution, becomes more acceptable in the public at large.

In these broad terms, this argument seems relatively obvious. Personalities grow inside the household, and those ties are often the most difficult to break. Schulman’s solution may seem just as obvious—the author encourages third-party intervention, preferably from the straight community, to help promote equality. If your friend has a gay son and he’s treating him horribly because of his orientation and lifestyle, you’re to step in and say something. Seems clear-cut and without question the commendable response to homophobia, but consider all those who find confrontation uncomfortable. Those who find it best to mind their own business.

Schulman’s book reads like an elongated essay that, at times, turns rant-heavy in her anger and exhaustion. It’s questionable who this book was written for—certainly those in the gay and lesbian community who can sadly identify so easily with emotional abandonment by their families, however certain passages—like “When we ask the culture why gay people must be constantly diminished, they often do not bother to answer at all. For example, I would like to know why literature with primary lesbian content can no longer be published with consistency in the United States…It is a non-question because the people at stake are being treated as though we do not exist and have never existed”—reflect an author solely interested in gathering the troops. (Those troops, though, might be put off by Schulman’s not-so-hot opinion of the gay-marriage movement.)

Issues with Schulman’s style aside, her work is of importance and her ideas quite provoking. Though perhaps a collection of specific stories from those who experienced homophobia in the home would’ve led to a stronger book, Schulman’s sensible arguments towards acceptance and equality cannot be ignored. (Tom Lynch)

“Ties That Bind: Familial Homophobia and Its Consequences,”
By Sarah Schulman
The New Press, 192 pages, $23.95