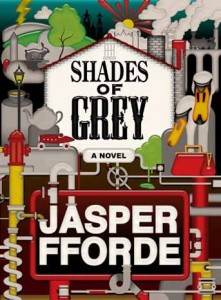 We live in a colorful world. If viewed from the outside, the Earth is a breathtaking blue. In Jasper Fforde’s world that he creates for his new novel, “Shades of Grey,” color, and your perception of it, dictates your social status. A Colortocracy, it’s called. The higher the color spectrum you can see, the more advanced your status becomes. Our narrator, Eddie Russett, is a Red who’s content with the social hierarchy and its limitations, until he meets Jane, a stunning Grey, and he begins to question the nature of things. Fforde peppers his breezy tale with fine-tuned humorous observation and charming wit—he begins each chapter with one of the world’s “laws,” such as “All children are to attend school until the age of sixteen or until they have learned everything, whichever be the sooner.” Fforde’s quirky work could easily fly by in a weekend. It’s reported to be the first book of a planned trilogy. With a world like Chromatacia, as it’s blessed, Fforde could easily keep going and going. (Tom Lynch)