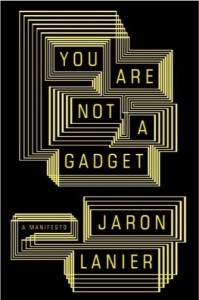 It’s the season for manifestos. Earlier this month, Atul Gawande published a refreshingly bare-bones argument for the use of a simple checklist in critical tasks. Later this month, David Shields will publish “Reality Hunger,” which argues why literature is at a crossroads.

Add to this political manifestos, rehashed manifestos and the manifestos that float across the Internet like sea kelp in the ocean and it’s easy to see why a reader dipping and diving into this soup of advice and principle will feel some degree of manifesto fatigue.

If you have time for just one manifesto, eat your Wheaties and pick up a copy of Jaron Lanier’s thrilling and thought-provoking “You Are Not a Gadget,” a beefed-up, much-expanded version of an article he published in Wired magazine ten years ago.

In that article, published when the dot-com bubble burst, Lanier attacked what he called cybernetic totalism, which in layman’s terms amounted to the notion that our digital existence would eventually subsume our physical and individual world.

Lanier was not alone in sounding this alarm. In 2001, Richard DeGrandpre published “Digitopia,” a critical look at how the way we operated over digital spheres was altering the notion of the self.

Nine years on, however, many of the incipient ideas of what both DeGrandpre and Lanier called the digitati have come to pass. Computing clouds owned and operated by large organizations like Google have created both a new epistemology and a new eschatology—or to use less fancy words, the way we get and gather (and what we expect from) information has been radically altered. This, in turn, has altered what we believe.

It’s not news to anyone reading this (especially if you’re reading it online): We now expect information (and entertainment) to be free, or nearly free. We also expect that we can get it anonymously.

A pioneer of virtual-reality technology, Lanier approaches these assumptions from a design perspective, extrapolating outward through studies of behavior to examine their effects, asking always: Was this the best way to set up a virtual network for information and connection?

This sounds like a wonky thought experiment, but given his multi-disciplinarian interests—Lanier also is a composer, pianist and brain-for-hire for laboratories—he makes a good deal of common sense.

For example, Lanier starts with a description of the development of MIDI as a programming language for keyboard music. As he tells it, MIDI, which had never been intended to encapsulate the whole range of musical sound, was being relied upon, bent and twisted, in order to translate everything from an oud to an opera singer into a digital format.

As any vinyl addict will tell you, there is something missing from sound we hear digitally. The same goes, he says, for the design and presumptions of the Internet.

Lanier is at his most convincing while parsing the illogic of the open source/open culture direction of the Internet. His position is that the price we pay for free content everywhere we point our browser is a severe devaluing of individual human creation.

Computing clouds depend on crowds, as Lanier points out—crowds of people using machines, crowds making their content free for the searching, crowds developing the habits and browsing activities that are attractive to advertisers. Lanier argues that the dependence of this model on advertising means that much of what is made and created over the Internet is beginning to look like advertising.

Moreover, without leaning on any kind of political ideals, Lanier argues that there is something fundamentally wrong with a system that draws on people’s efforts but benefits only its owners, which is the direction he sees cloud computing heading.

Lanier is not a Luddite, and he rejects the binary opposition of progress/regression. He is, however, a humanist, and whatever one makes of this book, from its occasional shout-outs to fellow techies to its rather Armageddon-like projections, it is a necessary corrective in the echo chamber of technology debates.

“You Are Not a Gadget” challenges many dominant ideologies and poses theoretical questions, the answers to which might start with one bright bulb, but depend on the friction of engaged parties. In other words, Lanier is acting like a computer scientist. Let’s hope he is not alone.