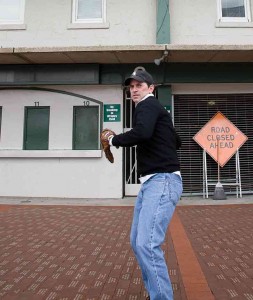 Billy Lombardo strolls into The Breakfast Club on Hubbard Street fifteen minutes late, having missed his stop as he took the train into the city from his home in Forest Park. He was writing, he says, finally making progress on something new, and he wasn’t paying attention. The author, though in his forties, exudes a childlike whimsy when he laughs at his mistake—he’s apologetic, but he wears an excited, goofball sort of grin that’s apology enough. He has a lot to smile about.

Lombardo’s first novel, “The Man With Two Arms,” was just released by Overlook Press, a baseball book about a father who teaches his son to throw with both his left and right arms; the son becomes Major League Baseball’s first superstar ambidextrous pitcher. This book follows last year’s acclaimed “How to Hold a Woman,” Lombardo’s collection of vignettes and short stories about a family suffering immense grief after the death of a child. His first collection of stories, the award-winning “The Logic of a Rose,” is a genuine Chicago book; Lombardo bases his stories in Bridgeport, the neighborhood in which he was raised, “a rich childhood,” he says.

Over coffee amongst the Saturday morning early-lunch crowd, Lombardo says that he gained the courage to write about his neighborhood once Stuart Dybek wrote about Bridgeport in “The Coast of Chicago.” “After I met Dybek I felt I had permission to write about some of the stories. This was right after Lenard Clark was beat up pretty bad, and that’s the only thing that people were talking about.” 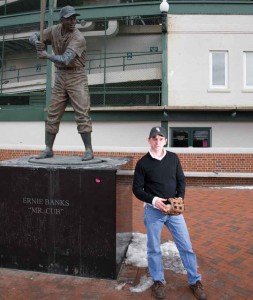 Lombardo fell into writing later than many published authors you come across these days; not terribly interested in the art in high school, he studied communications in college and didn’t start putting words down on paper seriously until the mid-nineties. He first ventured out by doing performance poetry at the Green Mill, though he admits he didn’t know much about poetry at all. “When I started writing stories, I had no idea what I was doing,” he says. “I was doing alright on stage at the Green Mill, doing short narrative pieces, and I wasn’t thinking about [Bridgeport] much at the time.” After he realized he could inject his own personal history into his stories, that he had “permission,” as he calls it, “The Logic of a Rose” started coming together. “The timing was sort of odd—here were these Bridgeport stories, about a good, nice childhood, and it was really a terrible time in the neighborhood’s history.”

Of his childhood, Lombardo says, “I always thought about myself as a writer, but I didn’t have much to back it up.” A blue-collar family, his mom stayed at home with the kids while his father worked a variety of jobs. His father made him read every day for a half hour. “But he didn’t really care what we read,” he says. “I knew how to read, but I just read words, I liked the sound of them. I didn’t read very deeply.” The first thing he wrote that gave him confidence as a writer was a poem. For a girl. When he was 12.

“It was just this stupid poem I wrote to this girl I had a crush on, this ridiculous thing I wrote,” he laughs. “But it was this perfect thing—I felt like I had done something.”

Lombardo got a kick out of the performance aspect of reading poetry at the Green Mill, and in many ways that’s what kept bringing him back to the venue. “It was really about audience and sound,” he says. “I like the audience. I like performing. I still like doing readings, that kind of thing. I like the audience’s reactions. I didn’t really think much about performing—I just wanted to get a reaction from the audience. I wanted to quiet down the Green Mill. There’s a lot of people, decent writers, [who go up and read] and people just keep talking. But when that place goes silent, it’s a special feeling. But sometimes I would be up there experimenting with what I felt was a good poem for the Green Mill or whatever, and halfway through I’d be like, ‘Fuck, why did I read this poem?’” He breaks out laughing. “But it’s all about getting the [good] reaction again. It happens because of something genuine they think is coming from you. Because of the words. Once I got it I wanted it again.”

For Lombardo, writing became about communication as much as anything else—with the audience, with readers, with everyone. “If you nail something when you’re writing, you just know it, you just know that you nailed it,” he says. “It never happens for me when I speak.” 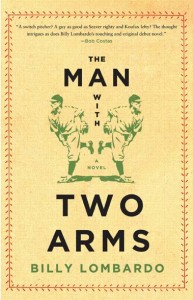 Danny Granville spent almost every waking hour of his Chicago childhood learning to throw a baseball with either arm, under the strict tutelage of his father, Henry. He becomes a sort of pitching machine—a superman freak who’s capable of throwing the ball perfectly with either arm, a tremendous and unheard of asset in baseball. He works his way through the Cubs organization and quickly finds himself in the majors. Danny’s described as having the right arm of Seaver and the left arm of Koufax. Pressures follow—the spotlight, the fans, the media. While Lombardo gives Danny much more than just baseball—he loves to paint as well—he seems to throw at him much more than anyone could handle. “The Man With Two Arms” isn’t simply a baseball book; it’s about family, about the unique, incomparable relationship between a father and son, about survival and competition itself.

The idea started to take shape in 2003, after Lombardo was on vacation with his family in Florida, and his son, 10 at the time, started throwing a baseball around lefty with some surprising success.

But my first question to him was an obvious one, at least to me. A Bridgeport kid from a blue-collar family—how the hell did he decide his hero in his novel should be with the Cubs? Isn’t that some sort of sacrilege?

Lombardo laughs. “My affiliation is with the Sox, for sure,” he says. “My son, who is more of a baseball guy, he’s nuts about the Sox, so I had some explaining to do when I decided to go with the Cubs. It was gonna be Sox, in the book, originally. But I’m dealing with a tool box that’s not quite packed yet. I don’t have the greatest tools in that yet. When I started writing the book all I had was a fucking mallet and a jeweler’s screwdriver, that’s about it.”

After I admit I’m a Cubs fan, with only a modest amount of shame, Lombardo offers: “I also knew the Cubs weren’t going to ruin it by winning the World Series.”

“The Man With Two Arms” necessarily includes some intricate baseball passages, descriptions of on-the-field face-offs between pitcher and batter, the strains of the minors, training regimens. You wouldn’t know it from the book, but when he started writing, Lombardo didn’t know baseball all that well.

“My understanding of baseball was really limited,” he says. “I only knew what my son knew about baseball. My son’s introduced me to it.”

By now, Lombardo’s a baseball nut, and he has a legitimate concern that the book will alienate some readers who don’t share his passion for the sport. “It’s still a concern. It looks like a baseball book,” he says. “With ‘How to Hold a Woman,’ I was just as fearful that that would appear to be a woman’s book, as I’m afraid this would appear to be a man’s book, you know? That’s why there’s so much more in there. I originally thought it was going to be a baseball novel, but I don’t think it’s a baseball novel anymore.”

Baseball, more than other sports, has this inherent ability to create sweeping sentimental narratives. This may be helped by Hollywood—think “Field of Dreams” or “The Natural”—but that’s not the sport’s fault. There’s a history, it’s a sport that’s taken personally; fathers play catch with their sons, sons learn from their fathers. America is offended—outraged!—when players take performance-enhancing drugs, yet shrug when athletes in other sports indulge as well. Baseball lends itself to melodrama.

“What’s really interesting,” Lombardo says, “is that I didn’t have that with my dad at all. He wasn’t a sports guy. He certainly participated in our lives in other ways, but our childhoods were less chaperoned than my own children’s. The first game I went to with my stepson, Carlton Fisk hit a fly ball into the stands. I had sandals on—it’s ridiculous to go to a baseball game with sandals on, I didn’t even know how to go to baseball games—and the ball ended up under my foot. I just remember him looking at that ball the whole game, and that was my first experience with father-son baseball, that was part of the joy of that thing.” 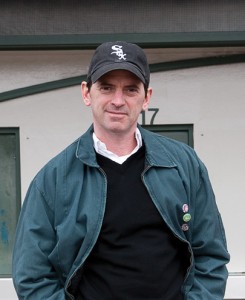 “The Man With Two Arms” and “How to Hold a Woman” have more in common than one would think—they’re both about families, about relationships between parents and children, between married couples, and how families struggle to overcome crisis.

“I guess that’s sort of—I feel like it’s all I know,” Lombardo says of the themes. “It’s the only thing that doesn’t require any kind of research for me. It’s a thing I attended to as a kid. I wasn’t paying attention in ways my parents would’ve liked me to be paying attention in school, or teachers, but I was paying attention to how people felt. Whereas I had to [research] baseball and science. But you know, I’ve been in a family, and I’ve been a father, and I’ve been a husband, and I’ve done poorly at both of them at some times and I’ve also done alright. I feel like that’s the arena I’ve always been in…and that that’s where all the stories are anyway, in these relationships. The stuff that was the hardest to write about was the actual baseball game. It’s like fucking impossible to write about that.”

Apart from his new novel, Lombardo also has a new novella in the bag that he’s calling “The Day of the Palindrome,” featuring an adolescent narrator who has a sort of supernatural ability to control the behavior of others. “An “idiot whisperer,” Lombardo calls his character. He teaches English Literature and Creative Writing at The Latin School of Chicago; he also instructs a handful of courses through UCLA’s extension program. Perhaps most impressive, Lombardo is the co-founder and artistic director of Polyphony H.S., the annually published student-run journal of writing by high school students from all over the world. Asked what is more rewarding for him, his own writing or working with the students on Polyphony, and he says the two “come really, really close.”

The magazine launched right around the time “The Logic of the Rose” was published. “For the first time in my life—it was similar to the experience at the Green Mill—I felt like I was being received for the first time in a way I was thinking about myself all along,” Lombardo says. “You know, somebody thinks you’re an ass, or somebody thinks you’re just a fucking punk, or a racist from Bridgeport or whatever, then all of a sudden, you’re getting an email from some blind woman who had your book read to her and she’s wondering if it’s available on tape. Or from the baker from the bakery you grew up with who remembers you, and he’s 82. Finally the world was responding to me in the way I was sort of thinking about myself all along, you know?”

With “The Man With Two Arms,” Lombardo’s world will grow larger. “Pretty much, with my first two books, I probably have my DNA on more than half of the ones that have been sold, because I’ve touched them, I’ve sold them myself. So that’s what’s enjoyable about this. I know some people who aren’t even relatives will end up reading it.”