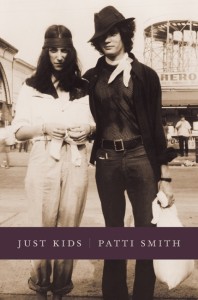 Forty years from now, will artists write about this time as elegantly and poignantly as artists do now about the 1960s? Who’s to say what legends live in front of our eyes. Musician Patti Smith is a legend, of course, the type of musical icon who’s changed lives. Her new memoir, “Just Kids,” chronicles her relationship with photographer Robert Mapplethorpe, in which they started as lovers in the late 1960s and then developed into great friends until his death of AIDS in 1989. As young, undiscovered artists, they strove for greatness and filled each other’s tanks with New York City, bohemian inspiration. The notorious Chelsea Hotel—where Smith and Mapplethorpe lived, where they knew Burroughs and Hendrix, Ginsberg and Joplin—will forever remain an artistic and cultural touchstone. Hardships, yes, but when romanticized it’s glorious. Smith’s nostalgic, bittersweet text allows her to write her late friend one last love letter, of poetry and art, of songwriting, of life as kids in Brooklyn of the past. (Tom Lynch)