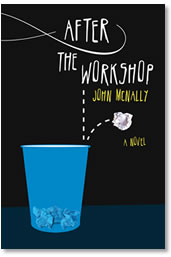 John McNally writes funny. He writes sharp. “Swift” is a term often used to describe his work. His breakthrough book, “The Book of Ralph,”  was a charming ode to youth in seventies-era Chicago. A few years later, with his short-story collection, “Ghosts of Chicago,” McNally injected life into Chicago’s famous, notorious and epic characters. His new novel, “After the Workshop,” seems close to the author’s own experience—hero Jack Sheahan graduates from the Iowa Writers’ Workshop, publishes a story in the New Yorker and works on his novel for years and years, only to become a media escort while the manuscript sits under his bed. McNally did Iowa, worked as a media escort. A fictionalized memoir, if you will. “After the Workshop” develops much like McNally’s other work; striking, witty observations, satirical comedy, moments of abundant heart.  While his narrator is surrounded by writers practically at all times, the misadventures are endless, and McNally’s casual style lends the book a quick, fun-loving pace. Tonight, Sam Weller and Brian Costello also read from their work. (Tom Lynch)