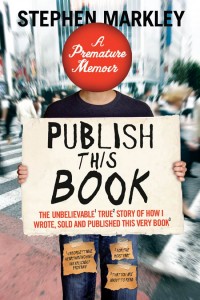 “Through the whole process, I was getting rejected by agents and publishers, ” says Stephen Markley, describing his attempts at getting his first novel published. “It was a lot of ‘We don’t think this can work’.” Then, Markley went “meta-fiction” and wrote “Publish This Book,” a detailing of the trials of trying to get a novel published. “It’s about finding an agent, writing a book,” says Markley. “It’s also a memoir about being out of college and finding out what the next step is.” This Friday, Markley will read from “Publish This Book” at the Book Cellar. While the idea of the actual text is often times boggling—“That kind of fight to shape it [the story], ended up being a big part of the book,” says Markley—there are larger themes at work that he assures will make this a book for readers and writers alike. “It’s definitely something that speaks to people in their twenties,” says Markley. “For people just getting out into the world.” (Peter Cavanaugh)