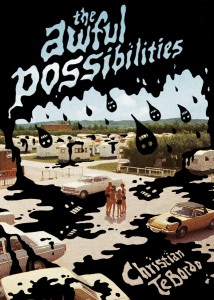 If Chicago’s Featherproof Books is like that pirate radio station you don’t want your parents to hear you listening to, their latest book—Christian TeBordo’s “The Awful Possibilities”—is that song you heard last night that is at once exciting and provocative yet dark and uncomfortable enough that you have to curb your immediate desire to tell the first person you see. “I never really set out to write a collection, ” says TeBordo. “So there’s about ten years of stories in there.” The book, which was officially released earlier this month, is another physical benchmark from the young guys at Featherproof. “There’s nothing that I hate more than when you read a book and you close it and the cover is not the book you just read,” says Zach Dodson, who is responsible for the designs and illustrations at Featherproof. “The Awful Possibilities” is a dark book, and throughout you see these black goo-monsters taking over the pages. “I was worried about it when I started working with them,” says TeBordo about the design of the book. “I didn’t know how to communicate what I wanted.” Dodson, however, brings a solid resume to the table and assuages concerns pretty easily. “I ask them what the book looks like in their brain,” says Dodson about his process. Hence the goo-monsters taking over, “the same way darkness in his [TeBordo’s] stories just takes control, takes over.” (Peter Cavanaugh)