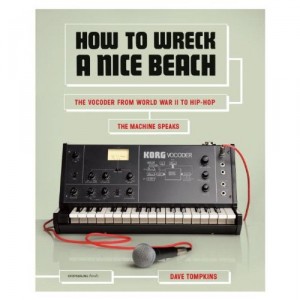 Stop Smiling may have stopped publishing a magazine in favor of books but, if their plans for their debut release are any indication, they won’t let the rarefied airs of book publishing force them to dial down their promotional festivities. And an unusual debut it is, in which music scribe Dave Tompkins (The Wire, Vibe, Village Voice, The Believer) crafts “How to Wreck a Nice Beach—The Vocoder from World War II to Hip-Hop: The Machine Speaks” which is exactly what its title promises, a loose history of a once-top-secret tool for wartime communication and later an over-the-top gadget for special music effects. How often do you get Adolf Hitler and Fab Five Freddy into the same conversation? Fortunately, Tompkins is a wordsmith with ample verve and rapier wit. He augments the potentially dry first half of the book, the science and war stuff, with a nice selection of old photographs of bulky machines and the serious-looking folks who manned them, the kind of pictures that get used in ironic advertising mashups nowadays, as well as choice anecdotes, like one in which a young Ray Bradbury visits the World Fair where the newfangled Voder was being demonstrated, to nearly unmemorable effect. (In a strange, or perhaps not, bit of serendipity, Stop Smiling’s second book release is Sam Weller’s collection of Bradbury interviews.)  Before long, the war was over, and soon the tool we used to beat the Germans was being used by Germans (Kraftwerk) to teach us a thing or three about a new kind of electronic music. They may have stolen the moment, but we took it back, to seminal effect in hip-hop, disco, funk and pop. As part of Tompkins’ whirlwind takedown of Chicago this week, he’ll be playing records a couple of times, as well as reading. I’m holding out for Peter Frampton’s “Do You Feel Like We Do,” my own personal first Vocoder memory. (Brian Hieggelke)

Dave Tompkins will be in Chicago May 6 and May 7 for three different events:

May 6, 7pm-9pm, slideshow and discussion at the Stop Smiling Storefront, 1371 North Milwaukee, moderated by James Hughes, editor of “How to Wreck a Nice Beach.” Free.

May 6, 9pm, book release after party at the Charleston, 2076 North Hoyne, with DJ sets by Dante Carfagna, Courtland Green and Dave Tompkins. Free.

May 7, 4pm, book signing at Dusty Groove, 1120 North Ashland, wherein Dave Tompkins will be on hand to sign books and play records. Free.