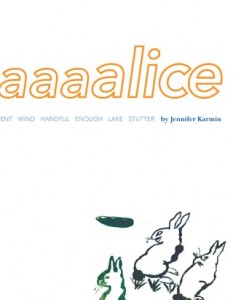 Local poet Jennifer Karmin’s “Aaaaaaaaaaalice” isn’t your standard book of poems, and Karmin’s May 16 event promises not to be your standard one-author-and-a-mic poetry reading. Instead, the book-release party will feature Karmin performing excerpts from her “text-sound epic” in concert with Chicago poets Joel Craig, Kathleen Duffy, Krista Franklin, Chris Glomski, Laura Goldstein, Lisa Janssen and John Keene (all of whom will also read a few selections from their own works).

As a book of poems, it’s a meditation on foreignness and language, combining impressions from her travels through Asia with excerpts of a sixties-era Japanese-language textbook and echoes of “Alice’s Adventures in Wonderland.” After returning to the States, she explains, she had the raw materials for some kind of travelogue; “Alice in Wonderland” provided “an example of a female travel narrative, one that is not based on mastering and conquering.”

“The meaning of language is always changing,” she says. “I’ve tried to create a form on the page that can facilitate this experience for the reader and performer.” While Karmin calls “Aaaaaaaaaaalice” “a word score for polyvocal improvisation,” its identity as a performance text was less the result of intent than of logistics. “I wrote the book with multiple voices in my head,” Karmin says, and after finishing the manuscript, “I realized that I couldn’t read the book aloud myself.” She encourages performers to “equate the style of each text with imagined tones, rhythms, voices, etc.”; other than that, she leaves the direction of the readings to physics. 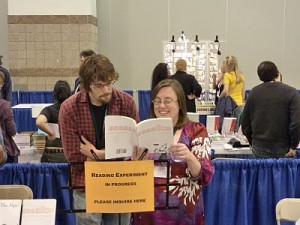 Explaining how “Aaaaaaaaaaalice” works in performance, Karmin cites Heisenberg’s uncertainty principle: just as “it’s impossible to determine both the exact position and momentum of a subatomic particle,” every reading “should produce new results.” Indeed, they have.

Since those first group readings, performances of “Aaaaaaaaaaalice” have grown increasingly theatrical. “I’m noticing the performers starting to move more during the readings,” she says, recalling a reading in Boston where two participants “read their parts behind me near a window. It felt like suddenly there was a play happening in the middle of the reading.” It’s an unanticipated development, but considering Karmin’s fascination with flux, it’s a happy one. (Rachel Sugar)