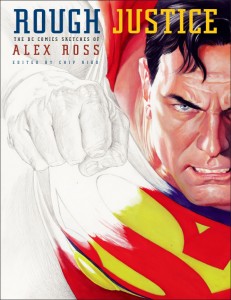 Artist and local resident Alex Ross is one of a very short list of comic-book artists working in the superhero genre anymore with a truly idiosyncratic visual style. Particularly notable is that what others draw, he paints. So his new sketchbook, “Rough Justice,” wherein he too draws, in preparation for painting, is revelatory. This guy could easily work with pencil and ink alone, since his “roughs” are often on a par with, nay superior to, the finished work of many of his peers. Equally interesting are the insights into the creative process, as practiced by the mainstream comic book industry these days, that emerge in his descriptions of some of the projects that never saw the light of day, such as proposed creation of an imagined son of Batman, called Batboy. It’s all fanboy fantasia. (Brian Hieggelke)