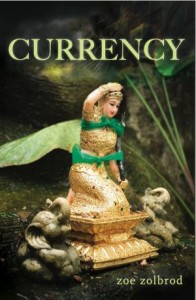 He’s a mostly well-intentioned hustler with business ambitions, rock-star chic and, we’re told, sexually magnetic. She’s an American backpacker wandering through Southeast Asia—artistic and lost, with an air of entitlement, minus the cash to back it up. When they meet, she’s out of money, and he has a plan. We can see where this is going. Chicago author Zoe Zolbrod’s debut novel, “Currency,” follows Piv and Robin as they get there, through the physical beauty of Thailand, past the innocence of fantasy and into the darkness of international crime.

The pair is united by shared restlessness. Both are drifting through their mid-twenties, vaguely ambitious, but directionless. In a sweet, post-coital haze, they hatch plans to import jewelry from Indonesia. It’s less a pragmatic business plan than a symbolic promise; with it, their romance and their business aspirations are inextricably intertwined. In daylight, though, their Indonesian dreams are no match for their fiscal realities, and Piv turns to a friendly acquaintance for help. Willfully ignoring the less savory details of the arrangement, Piv and Robin find themselves—mostly unwittingly—running increasingly dangerous errands for an animal-smuggling operation.

Despite the Hollywood-sounding plot, “Currency” is neither a thriller nor a grand romance. Instead, it’s a novel led by atmosphere. From their first encounter, both Piv and Robin approach their relationship with the distance of travelers who have done this before. Tentatively anticipating betrayal of one kind or another, they do their best to insulate themselves against caring. They tow a tenuous line between love and mistrust. And yet, despite the intrigue of the psychological dance between them, Piv and Robin aren’t particularly compelling apart.

Zolbrod alternates between Piv’s voice, his English not-quite-fluent, and Robin’s perspective. Except for Piv’s accent—it’s an admirable risk on Zolbrod’s part, and one that breaths both life and lyricism into an otherwise predictable portrait—the his/hers convention gives us little insight into either character. Instead, the prose is uniformly dominated by Zolbrod’s exacting eye for detail.

At worst, the novel seems to buckle under the weight of her descriptions, which overpower any hints of subtlety; we get the sense Zolbrod doesn’t trust her readers to get it any more than Robin and Piv trust each other. When “Currency” works, though, the mechanics recede, leaving in their stead vivid impressions of contemporary Thailand. Zolbrod does capture a long-term traveler’s forlorn sense of rootlessness—combined with the intoxicating scenery, it’s almost enough.  (Rachel Sugar)