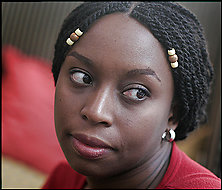 The Midwest’s premier festival of books hits the streets of Printers Row this weekend, and its proprietor, the Chicago Tribune, continues to make its mark on the event for better and for worse (though based on last year’s whispers about whether it was the last book fair, given the economy and its owner’s bankruptcy, we’re grateful it exists this year at all). Most notable this year is the introduction of paid events, extending into the evening on Saturday, under the rubric Lit After Dark and Get Lit. (The Trib changed the name from Book Fair to Lit Fest last year;  it’s fun to see how creative they can get with their new word. This year, look out for Lil’ Lit Park, and the “Get Lit” premium programming, which we’re especially intrigued with. The Urban Dictionary defines “getting lit” as “The state of being so intoxicated (regardless of the intoxicating agent) that all the person can do is smile, so that they look lit up like a light.”) As far as we can tell, you can now pay $10 for what has long been a free part of the book fair, which is a mix of entertainment from the theater, music and literary world,  with the addition of a Bud Light-sponsored concert by the San Diego “piano-driven” rock band Augustana, which has toured with the likes of Dashboard Confessional and O.A.R., and draws comparisons to Counting Crows and Maroon 5. We’re certainly not music curmudgeons, but one of the things that always set this event apart from other street fairs in Chicago was the absence of bands at night hired to bring out the traditional street-fair crowd; it would have been nice if at least the booking had some creative, you know, lit element to it.

As for books, expect to see less of them. The bookseller area has been reduced by a full block, now ending at Harrison, rather than extending to Congress, due to the major construction project on Congress. Authors, thankfully, appear to be out in some reasonable force, with a sizable list of readings and panel discussions designed to help them converse about their books with the public. It appears to be a somewhat scaled-down list, with a heavy skew toward Saturday, and a reinvigoration of the Tribune’s promotional bandwagon as epitomized by their paid (!) “Trib Nation Living Room.” For more information look for the good old-fashioned newsprint guide on site, or consult their rather confusing web site at http://featuresblogs.chicagotribune.com/printers-row/printers-row-lit-fest.html. (Brian Hieggelke)

A few noteworthy highlights featuring out-of-towners harder to see in Chicago at other times, in addition to Daniel Clowes (see Reading Preview), include:

Christopher Hitchens, the essayist and author most recenty of “Hitch-22, Some Confessions and Contradictions: A Memoir.” at the Harold Washington Library’s Cindy Pritzker Auditorium, Saturday at 10am. (Free advance tickets required.)

Sebastian Junger, of “The Perfect Storm” fame, discussing his new book, “War” at Jazz Showcase, Saturday at 10:30am.

Barbara Ehrenreich, author of “Bright-Sided: How the Relentless Promotion of Positive Thinking Has Undermined America,” at Digitally Lit Room 2, Saturday at noon.

Renowned historian Robert Remini, author of “At the Edge of the Precipice: Henry Clay and the Compromise that Saved the Union,” at Digitally Lit Room 2, Saturday at 1pm.

Nigerian writer Chimamanda Ngozi Adichie, who just made the New Yorker’s new “20 Under 40” list and is the author of “The Thing Around Your Neck,” at the Harold Washington Library’s Multipurpose Room, Saturday at 1pm. (Free advance tickets required.)

Jennifer Egan, author of “A Visit from the Goon Squad,” at Grace Place, 2nd floor, Saturday at 4pm.