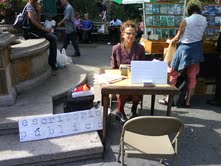 It’s a typical experience to be walking down a Chicago sidewalk and be stopped by a volunteer activist who wants your help (in other words, credit card number) to save whales or trees or something else in danger. Imagine how surprised you might be to run into someone offering only letters, and for just two or three dollars each.

That’s exactly what writer Jennifer Hofer did in the first part of Red Rover Series’ Experiment 37: Public Words—Letters and Interviews.

At three o’clock on June 3, Hofer set up a folding table and two chairs on the corner of Damen and Milwaukee. On the table, she placed two things: her mother’s antique typewriter, and a cardboard sign listing her fares, in both English and Spanish: LETTER: $2, LOVE LETTER: $3. Her journal sat in her lap.

Hofer’s modest sign and setup attracted a lot of attention. From behind a pair of ivory cat-eye spectacles, Hofer’s face lit up as she smiled and patiently explained the concept of her art to curious passersby: Yes, she is indeed writing letters. Yes, she’s a writer, and also a poet, a teacher, an interpreter and a translator. No, this is not her only job. “This is not what I do for a living, obviously. I’m charging two or three bucks per letter,” Hofer jokes to a potential participator.

In forty minutes, Hofer had written six letters. Generally, Hofer would invite an interested person to sit down with her and describe who they wanted to write to, and why. “Some dictate exactly, but some let me do it and see what I come up with.” Some letters, particularly love letters, require slight poetic embellishment. Hofer types each letter up on her typewriter, folds it into an envelope, and provides a stamp. “But I don’t lick the envelopes. It feels too close,” she says.

Hofer has been writing public letters regularly since 2004, after visiting Mexico City, where public letter writing is commonplace on the streets. At the time, Hofer had purchased a house in Los Angeles. The previous owner left behind a small wooden table he’d made by hand, and Hofer immediately knew she would use the table for her letter writing.

The second half of Experiment 37 took place a couple days later, at the Outer Space Studio, when writer David Emanuel asked participants to help him write and assemble letters into the pages of a hand-bound chapbook or zine and author Anne Elizabeth Moore conducted interviews with participants about their lives as Chicagoans.