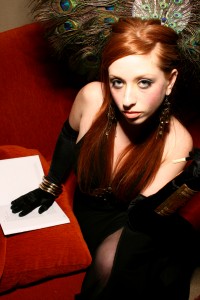 On a steamy July evening, the air in the House of Blues Foundation Room is buzzing softly with the clink of stemware and quiet conversation. Then you spot her: the woman with whom you’ve been trying to steal a private moment alone all evening. You capture her gaze, and she smiles demurely, her eyes shining bright beneath fake feathery lashes. You cross the length of the bar in only a few steps, not even pausing at the tarot card reading table, not even pausing to speak to the mysterious man with the eyepatch, who earlier introduced himself as Tennessee Pink. Your ears want only her.

In the center of the room, she offers her hand. “I’m Madame,” she says, her voice soft and slightly husky. You follow her out of the room and through a set of heavy wooden doors. The room on the other side is small, and you take a seat on a plush leather couch. As Madame pulls the doors closed, you notice the walls are covered with silk fabrics pocked with sequins, which wink at you in the candlelight. Madame settles herself into the seat across from yours, close enough that her silk dress brushes your knees. With another smile, she offers you her wares: poetry, read from the pages of the small book in her hands. You accept, and she begins to read to you, her voice so low you must lean forward to hear. It’s an intimate transaction, albeit unconventional, this secret sharing of words whispered for your ears only. But intimacy is exactly what Madame, Tennesee Pink and the other members of The Poetry Brothel want you to feel.

The Poetry Brothel was founded in New York City by Stephanie Berger, aka “Madame,” and Nicholas Adamski, aka “Tennessee Pink,” with the intention of creating a themed poetry-reading series, but it quickly became what Berger calls a “budding international movement.”

“The concept got bigger and bigger. It grew beyond our control!” Berger says. At a typical Poetry Brothel reading, there might be tarot card readings, gambling, absinthe and live painting. As each of the “whores” is introduced, they perform excerpts of their own original poetry and then mingle with guests, coaxing them to retreat to a private room for a small extra fee. Dressed in lace and silk, fishnet tights and pearls, the whores look quite convincing. But the concept, while partially reliant on aesthetics, is truly accomplished by the whores’ efforts to make the poetry feel intimate.

“When you remove the boundary between poet and audience, wonderful things happen, for the audience, the poet and the poems themselves,” Berger says. “The audience is more engaged, the poet has a chance to see the way their poems affect a person. The poems actually have to stand up for themselves in this context!”

As if it might possibly be misunderstood, Tennessee Pink addresses the crowd during the show: “Intimacy is the centerpiece of our performance!”

Certainly The Poetry Brothel creates an atmosphere unlike any other. I approach a pair of women just after they’d had the privilege of a few quiet moments alone with Madame. “She’s incredible, so talented. It’s like she got to know us in that room, like she became our friend,” one of the women, named Deann, tells me. Her friend Mimi adds, “She made the poetry beautiful, soft. It was so close to you. It was so personal.”

The intimacy must be catching, for The Poetry Brothel has met only success since it was founded. Branches were created in Paris and Barcelona, and the New York branch has toured across the United States. A press, Brothel Books, has been founded and plans to publish a series of chapbooks, as well as a series of anthologies containing poetry translated into French, Spanish and English. Workshops, described as “a finishing school for poetry whores,” are held regularly in New York City to assist those interested in using an alter ego to heighten their poetry.