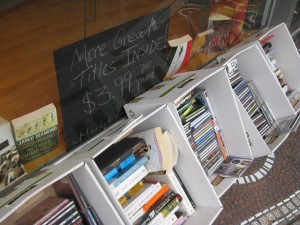 Susan Frischer’s husband knew they would need to think of something that would stick in people’s minds. Independent bookstores are typically the place to find rarities, relics and expensive antique bindings. But Market Fresh Books in Evanston has a different idea of what an independent bookstore should be.

“We joked it was how you would buy salami,” Frischer says. Market Fresh sells books by the pound, rather than pricing them separately. The store began online, through outlets like Amazon.com, but decided to open a brick-and-mortar outpost last Halloween. The idea has apparently caught on, because a second location has popped up, just a few blocks away.

While their main focus is books, you can also find DVDs, CDs and records, also sold by the pound. The store focuses on books that people could find in Barnes and Noble, more recent titles. But they do occasionally get more unique finds.

“We got a twenty-pound old-fashioned dictionary. One of those huge unabridged—from 1930—very loved,” Frischer says. “We were laughing—no way will it sell, since we sell by the pound.”

But the leather-bound behemoth sold to a woman who snuck into the store after seeing her boyfriend fall in love with it. In the end, that’s what Market Fresh really strives for. “Just so [books] don’t end up in a landfill and can be enjoyed by someone else,” Frischer says. (Lindsey Kratochwill)