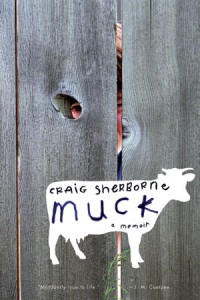 Names are important to the 16-year-old narrator of Australian journalist and playwright Craig Sherborne’s second memoir, “Muck.” The narrator refers to his mother as “Feet” because he used to call her “Heels” for her shoe-of-choice while the family lived in metropolitan Sydney. Now that they’ve moved to rural New Zealand to start a farm (the naming of which is debated over until they settle upon “Tudor Park”), she must scrub floors while barefoot, and there’s a noticeable lack of places which require fashionable footwear. The narrator’s father is “The Duke,” because he’s the owner of the farm, and the neighbor’s wife who doesn’t wear makeup is “Face-ache.” While the narrator takes great care to invent various nicknames for the people he meets, he’s never given a name of his own.

Like a lot of coming-of-age stories, this one embodies a Holden-Caulfield-copy who’s a pretentious twerp with a knack for talking above other people with buckets of sarcasm and arrogant wit. But these traits, while endearing in J.D. Salinger’s classic novel, are annoying and tedious in this nameless narrator. And as if we hadn’t caught onto their similarities, the narrator is actually cast as Holden Caulfield in his prep-school’s adaptation of “Catcher in the Rye,” because the staff suggested he’d be “perfect.”

As a unit, the family plays the part of upper-middle-class social climbers. They are, after all, the type of people who own a farm and call it a family dynasty, who construct their new home in anticipation of being the envy of their new neighbors, and who can’t bear the thought of being under-dressed and therefore habitually over-dress. It is clear that Sherborne intends the mother to suffer from some sort of mental illness, and for the father to struggle with his temper, but he has blown them up into such ridiculous caricatures of themselves that identifying with them is difficult, and perhaps impossible.

The memoir is partially redeemed by Sherborne’s skill—he masters complete control over his words and uses the imagination of the angsty adolescent to construct sentences that snap with originality. Also redeeming are a few atypical coming-of-age moments, which Sherborne handles with precision: punching an older man, flirting with much older women to avoid rejection from those of your same generation, trumping your father in a physical fight after telling him he’s a disappointment. However, the book’s abrupt ending makes us doubt if the narrator has changed at all during the story, and even worse, leaves us with the feeling that we’re missing much more than the narrator’s name. (Naomi Huff)