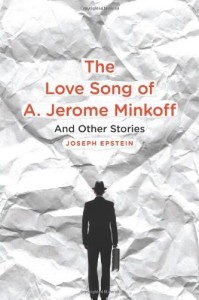 Humans seem born lusting to be heroes, but mundane adulthood seduces us into indolence. In his first fiction collection since his critically acclaimed “Fabulous Small Jews, ” master Chicago essayist/storyteller Joseph Epstein seems to offer an alternative: finding how to do right, without fanfare, in the lives we live.

Epstein’s Jewish milieu is much the same as Saul Bellow’s, though broader economically. The divorce body count is also high, but for the most part Epstein’s protagonists are not the parties responsible; they are also humane and less self absorbed. A fundamental empathy underlies each tale; both protagonists and author can place themselves in shoes other than those of older white men. Characters make less harmful, even noble, choices.

In “The Philosopher and the Checkout Girl,” for example, an older man reaches across his own presumptions about age and class to form a bond with a younger woman. He discovers it is not all “about him”; he sees her humanity.

“The Love Song of A. Jerome Minkoff: And Other Stories”
By Joseph Epstein
Houghton Mifflin Harcourt, 270 pages, $24