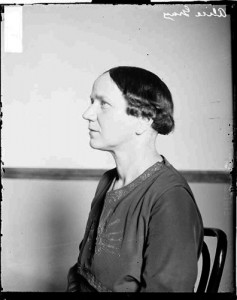 Janet Zenke Edwards’ historical account of a brilliant, independent woman who escaped Chicago for what she hoped would be the peace, freedom and beauty of the Indiana dunes is titled “Diana of the Dunes: The True Story of Alice Gray.” But ultimately, Edwards’ book isn’t about the mythical Diana, who lives on in ghost tales and in newspaper archives, where sensational accounts of fierce Diana of the Dunes and her wild lover Paul live on. Edwards’ book is here to set the record straight, to give witness to Alice Gray, the woman behind the fantasy.

The historically accurate Alice Gray cuts a strong figure in her own right. By unknown means (her family wasn’t well off), Alice attended and graduated from the University of Chicago, earning an undergraduate degree in mathematics and studying at the graduate level for four years. She worked for the U.S. Naval Observatory and studied in Germany. Even before she left for the dunes, Alice stood out as exceptional for her intelligence and self-reliance.

But Alice’s escape to the dunes is what earned her legendary status, both during and after her time. She gained notoriety for her determination to make it on her own in the wilderness and for her relationship with Paul, a tempestuous man of the dunes. As she moved through life in the dunes—swimming in the lake, walking through the sand, holing up through the winter—the press moved with her, recording, dramatizing and exaggerating her story. No wonder. Her larger-than-life already defied expectations. The jump to a madwoman, a mermaid, a ghost, wasn’t much greater, and Paul’s willingness to whip out a gun at slight (and not-so-slight) provocations helped the tall tale along. 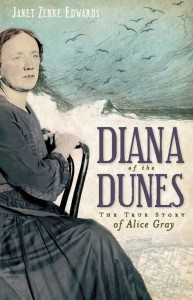 But “Diana of the Dunes” is a historical account of Alice, not Diana, and while Edwards relays the ghost tales, she’s also done the dirty work of separating the life of Alice Gray from the public persona of Diana of the Dunes. It’s applaudable work, and rewarding to learn that Alice was impressive in her own right. But the tall tales are so brilliant, they far outshadow timid hypotheses and citations, especially if you’ve ever watched the sun set over the lake, closed your eyes and listened to the freshwater waves gently crashing against the shore, stripped down and slipped into the water, unseen and unnoticed.

Diana’s curse was that she rarely went unnoticed. According to the ghost story, “Diana of the Dunes was discovered in the summer of 1916, when a lone fisherman trolling along the Indiana shore of Lake Michigan spied a young, beautiful woman splashing naked through the waves. After swimming, she danced like a nymph on the beach to dry off.” It’s a mesmerizing story, but Edwards is writing to record the historical truth (not, perhaps, some greater truth). “It does not seem far-fetched that as one of these necessary activities, Alice swam naked in Lake Michigan.” It’s a reverie worth immersing ourselves in, but Edwards feels compelled to constantly return to her unfailingly accurate portrait of Alice Gray.

Edwards vacillates between romantic portraits of Alice, Paul and the dunes, and a sense of obligation to analyze the accuracy of these portrayals. Many of these insights add depth to her persona rather than taking away from it: Alice was not attractive, she likely had another lover before Paul, she came from scarcity rather than privilege. Edwards is wise to have uncovered these details. But, like the rest of us, her heart is with Diana of the Dunes. The treasures she digs up should be put to use. “Although an explanation is lacking, for some reason the escape plan did not work out,” she writes. Edwards, like the reporters before her, must have her own story about why Alice and Paul’s escape plan failed. Historically accurate or not, I would have liked to find out what it was.

“Diana of the Dunes: The True Story of Alice Gray”
By Janet Zenke Edwards
The History Press, $19.99, 160 pages