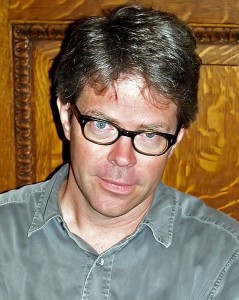 The reviews are in and the critics have spoken: “Freedom, ” Jonathan Franzen’s much-anticipated follow-up to 2001’s “The Corrections, ” good. Really good. Presidential good (Obama’s been spotted with an advance copy). And sill the debate rages on: just how good is it?

In the New York Times newsroom, for example, chief book (and noted Franzen) critic Michiko Kakutani and NYTBR editor Sam Tanenhaus double down over the novel’s recurrent allusions to “War and Peace.” “Laughably conceited” cries she, in an otherwise unexpectedly enthusiastic review. Quoth Tanenhaus, soothingly: the Tolstoy cameo is “a self-mocking acknowledgement that not even the greatest literature can save us from ourselves.” Oh, the debates they must have over at the Gray Lady!

The Times is not alone in its praise. While “Freedom” is not officially out till the end of the month, New York magazine, Esquire and the LA Times (among others) rank the novel somewhere between “great” and “total genius.” And although the boyishly middle-aged notorious curmudgeon seems to have lost out Halle Barry for the cover of Vogue’s September issue, he’s a coverboy at Time (first author in ten years! One of only eighty-three ever!), and is extensively profiled in both magazines.

Franzen’s latest is quickly wracking up as much press as the novel is long, which is saying something—clocking in at 576 pages, “Freedom” is no PoMo novella. Unless you’re media-obsessed, Franzen-obsessed, or unemployed, it’s hard to keep up. Lucky for you, then, we present The 2010 Newcity Awards for “Freedom” Criticism, high-school-yearbook style:

Most Florid: Sam Tanenhaus, New York Times Book Review:
“Once again Franzen has fashioned a capacious but intricately ordered narrative that in its majestic sweep seems to gather up every fresh datum of our shared millennial life.” Also praises the author’s “crystalline instances of precise notation shaped by imaginative sympathy.” Oh boy!

Most Hip: Benjamin Alsup, Esquire:
Always at the forefront of, uh, masculine cool?, Esquire sums it up in terms the modern man can understand: “Franzen delivers the massive, old-school jams.”

Most Bizarre Salute to the Midwest: Sam Anderson, New York Magazine
One of the first reviews out, Anderson threaded a corn motif through his glowing contribution to Franzenpalooza, presumably in reference to the author’s noted interest in heartland settings (“Freedom” follows the Berglund family of St. Paul). The grainy metaphors top out with this kernel of praise: “Some of Freedom’s sentences are so well-written you want to pluck them out, stab them with little corn holders, and eat them.”

Most Anthropomorphic: Lev Grossman, Time
Mostly, Grossman does the interviewing, but he’s also willing to take a gander at what the wildlife are thinking about the man-who-dissed-Oprah-but-saved-American-letters: “If they could talk, the otters would tell Franzen to man up, chill out and have a sea urchin.”

Ever the pot calling the kettle(s) black, we intended to add our enthusiastic two cents next week. (Rachel Sugar)