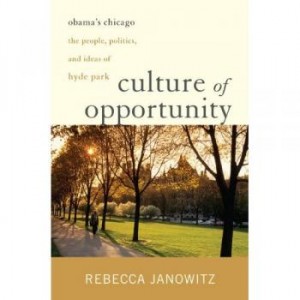 “Culture of Opportunity: Obama’s Chicago: The People, Politics, and Ideas of Hyde Park” could have been written without that middle phrase, a nod to the man that, as author Rebecca Janowitz points out, ninety-seven percent of Hyde Park residents voted for in 2008. But Janowitz decides to frame her narrative of a neighborhood she argues is exceptional and unique around Barack Obama, giving her history a plot arc and relevancy that makes her accessible to Obama fans at large.

Dedicated researchers willing to dig through dusty back issues of “Hyde Park Herald,” or even residents of the neighborhood with more than a passing interest in the area’s history and a couple years under their belt will find there’s not much new information, but that’s not Janowitz’s fault. As her title indicates, she’s interested in a different audience. She wants to share what’s instinctual to Hyde Parkers with the rest of the world: Barack Obama is, in part, a product of a community built on diversity and intellectualism, and the belief that these qualities are strengths, not weaknesses.

Hyde Park was the mid-nineteenth-century brainchild of developer Paul Cornell, who dreamed of “a self-contained, elegant enclave, benefiting from proximity to a growing city but sharing none of the liabilities of urban life.” Today, the neighborhood is in many respects self-contained and elegant, in part due to the University of Chicago’s ability to attract middle-class intellectuals who likely wouldn’t otherwise move to the South Side. But despite any efforts on the part of wealthier, often white, residents, the “liabilities of urban life” proved unavoidable. And, of efforts to create “the model of interracial living that many community residents had hoped to see,” Hyde Parkers found the challenge more daunting than they expected. “It may have been a successful experiment, but it was not a successful model,” Janowitz declares.

But Janowitz’s argument, that the distinct racial and class challenges of Hyde Park cultivated progressive, intellectual politicians, both black and white, reconciles both the successes and frustrations of the neighborhood. Obviously, Obama is the crown jewel of this argument, but he’s just the most successful of a long line of Hyde Park political leaders—Senator Paul Douglas, Alderman Earl Dickerson and Alderman Leon Despres—are just a few of the figures Janowitz describes as facing challenges similar to the ones Obama would later face. Obama’s careful navigation of race and class issues is attributable not only to his personal background, but to his careful analysis of the ways in which Hyde Park politicians who came before him dealt with the same touchy subjects. Black or white, all politicians in Hyde Park have had to navigate questions of race.

If all of this seems obvious to you, you’ll probably find you already know much of the history Janowitz recounts. But it’s a primer that should be required reading for anybody new to living in Hyde Park (ahem, first-years at the University of Chicago), and recommended reading for anybody curious as to why Obama was so skilled in navigating the political arena and winning the votes of people of all colors, classes and political leanings. (Ella Christoph)