by Brian Hieggelke
October 5, 2010Filed under: 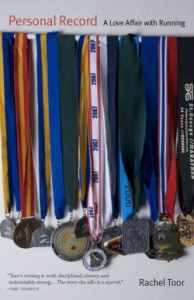 It’s marathon week in Chicago and tens of thousands of runners are vexed. At no time in the year do we think more about the sport, yet we’ve just cut our runs down to a minimum, in the rest-and-recovery strategy called tapering, so we’re restless. It’s too late to study strategy in running magazines about how to increase your speed, or how to prepare for the long run: the training is over, the wait is on. Books might be our only solace.

Running is the most primal of sports. Stand up and put one foot in front of the other, again and again and again. Racing, too, is elegant in its simplicity: do the same, but in a group, and see who finishes first. And yet, many writers are attracted to running, perhaps for its very simplicity. It affords time for contemplation, the kind that produces thoughtful prose and ideas, the time that our culture conspires to otherwise steal at every moment.

Running is also an inherently selfish sport. Sure there are relays, but for the most part we run for and inside ourselves. This combination of primal simplicity and self-absorption produces dull cocktail-party conversations but graceful, almost meditative books. Writing about running is writing about the self in a nakedly aware manner. (You can read my clumsy attempts in my daily marathon countdown blog at brianhey.newcity.com.) Rare is the work like Christopher McDougall’s best-selling “Born to Run,” which not only chronicled the narrator’s personal journey but did so with an epic narrative worthy of Hollywood. More typical is the runner’s memoir, like Haruki Murakami’s “What I Talk About When I Talk About Running,” or, just out in its paperback reissue, Rachel Toor’s “Personal Record: A Love Affair WIth Running.”

Toor came of age as something of an anti-jock, a bookish person, a Yale-educated, Montana MFA-carrying academic who came to running as an adult and became obsessed. In “Personal Record,” she describes this journey in short, punchy chapters (26.2 in all, like the miles in the marathon) each built around a central event: her first marathon, her emotional experience pacing a beginner at the New York City Marathon after 9/11,  her experiences with the somewhat bizarre Ride and Tie, a relay involving running and horseback riding. In between, though, we learn about her life and, by the finish of this slim volume, feel we really know her: the kind of man she’s attracted to (including details of both real and unrequited romances), the fact that she doesn’t cook, her mother’s illness, what she looks like naked (down boy: words, not pictures), even that she keeps a pet rat. Toor’ s progressed from an East Coast city dweller to a modern-day cowboy of sorts, living in Eastern Washington where races involving horses probably don’t seem so strange; the rugged Western States hundred-mile ultra-marathon her rodeo.

She’s fiercely competitive and, in her running career, has won her share of endurance races. But her graceful prose is the opposite: it’s giving, and reveals the pleasing paradox that hooks so many of us on running: this intrepid competitor finds no greater joy in life than helping another runner—someone she’s never met before spending those few hours together—achieve his or her own goals. It’s a fusion of competition and charity that makes this sport addictive. And a book that makes the taper more tolerable. (Brian Hieggelke)