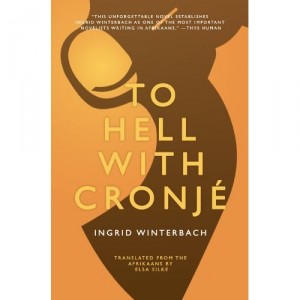 Scientists are often accused of being unfeeling, recording only the facts, unwilling to go with their gut instinct. In “To Hell with Cronjé,” by Ingrid Winterbach and translated from the Afrikaans by Elsa Silke, the scientist protagonists of the Boer War novel are submerged in grim feelings, rescued only by their ability to balance the war’s deluge of harshness with a desire to continue observing.

Perceptive without being sentimental, Winterbach channels the brutality of poverty, harsh weather, loss and, eventually, violence with cactus-like prose—dry and prickly on the outside but lush and rewarding on the inside. A jar holds a possibly prophetic severed head of a human. “There is something cold and saprophytic about the head, like a gigantic pale black fungus.”

Ben, a natural-history scientist, and Reitz, a geologist, are expert seers—they see well, and carefully. “The soap bush and the hartbeesbos. Cat’s tail and bitter bush, snake berry and kriedoring. The karrif chestnut. A few beetles. A small coral snake—like a necklace—on a rock.” There are other seers, too, of the prophetic kind, ones who claim to have contact with the dead. Relentlessly empirical—their belief in evolution baffles and angers their comrades—the men are struck open by the war and what they have lost. There is no assumption that their empirical efforts are any more truthful than the mystical discoveries of the seer Oompie, the possessor of the severed head.

The war turns the Afrikaaners of “To Hell with Cronjé” on their heads. Ben reflects, “Each of our camp-fellows has clearly been inured in his own particular way and is no longer suitable for active combat…” Abraham, twenty years old, has regressed to the mind of a two-year-old. Japie Stilgenmoed couldn’t stop reading and fell in love with destruction. The injuries suffered by Reitz and Ben are tangled and over the course of the novel, Winterbach slides along the threads of their psychoses, loosening the knot.

Seen through the eyes of a scientist, the austere becomes abundant. The depressing smallness of our lives, reassuring. Reitz “thinks of an earth the size of a grain of sand in the universe,” and “In this way he tries to comfort and protect himself against the invasion of malevolent thoughts.” Seeing the world through the eyes of Reitz and Ben, the readers too find gentleness in the sedimentation of human death and cruelty. (Ella Christoph)