by Brian Hieggelke
October 26, 2010Filed under: 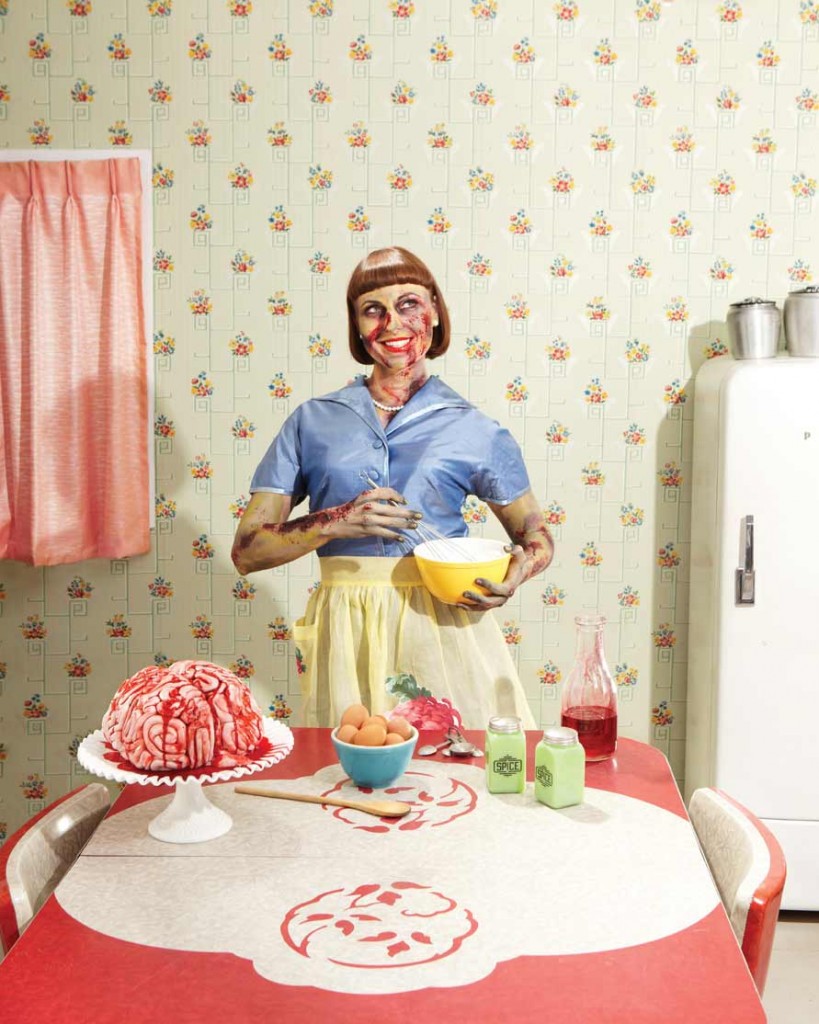 We’re living in strange times in the world of literature, a time when the classics are being fused with lowbrow contemporary monster mythologies into mash-ups that sell lots of books. “Pride and Prejudice and Zombies” was the first, and so successful that it spawned its own graphic novel and a spinoff fan-fiction prequel entitled “Pride and Prejudice: Dawn of the Dreadfuls.” Next came “Sense and Sensibility and Sea Monsters,” and now “Android Karenina,” all from Quirk Books. Quirk Books editor Jason Rekulak, the force behind the series, literally creates charts to make these hybrid novels, with great works of literature with lapsed copyrights on one side and monsters on the other, then contacts writers to produce the works. Rekulak claims to be inspired by music and video mash-ups—“creative copyright infringement”—making his line of books the equivalent of, say, Danger Mouse’s “The Grey Album.” But other than manifesting our cultural fixation with the ubiquitous mash-up in a most unusual manner, are these books important?

Neither alive and well nor a completely dying trend, the field of zombie literature, judging by the latest batch of classic lit mash-ups, could be more aptly and appropriately described as undead: limping along, market-driven, towards the inevitable conclusion when Quirk Books runs out of classics/monsters combinations… or when readers stop buying them. Yet books certainly inspired by, but outside of, this process-driven approach, like Alan Goldsher’s “Paul Is Undead: The British Zombie Invasion,” offer an alternative: a living metaphor, if you will, that makes use of the genre as a brainier (get it?) allegory.

Zombies haven’t always been book characters; in fact, they’ve emerged as almost solely movie figures (and, lately, video game characters) rather than book creatures, which is one reason why it’s automatically funny when they get dropped into Jane Austen novels. The groundwork for the current zombie fad, according to the biggest zombie expert I know, writer and editor Andrew Blossom (who’s currently writing his own zombie apocalypse novel), was at least partially laid by the graphic-novel series “The Walking Dead,” but many more people are familiar with Max Brooks’ 2003 “Zombie Survival Guide” (which purists disdain for ignoring the basic rules of zombies set in place by George Romero’s movies, but more about them later). “Zombie Survival Guide” was a runaway bestseller, and while it seems like a big leap to say its success most likely helped green-light, or at least inspire, “Pride and Prejudice and Zombies,” it brought zombies into a certain hip-lit fold that until that moment had been the terrain of vampires. 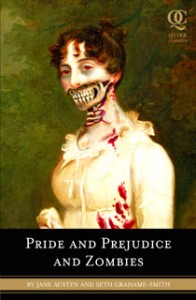 Any discussion of modern zombies has to begin with Romero’s incredibly influential series of zombie movies. From “Night of the Living Dead,” in which Romero established the rules for modern zombies as reanimated corpses (Romero didn’t invent the zombie figure, which originated in West African voodoo) through all its sequels up through “Land of the Dead,” in which the filmmaker reacts to the zombie resurgence of the last ten years, Romero is a touchstone by which we can measure the evolution of the zombie as an American icon. Zombie as signifiers, in the last sixty years or so, have developed from symbols for Communism in Romero’s first film—a giant horde that’s coming for us, that we can’t stop, no matter if we go to Vietnam or to Nicaragua. This pure paranoia combines with a strong feeling of moral uncertainty in seventies zombies movies—could you put a bullet in your mother, in your best friend? What is it actually like to be a zombie? Now, though, what we’re afraid of is the chaos that zombies create; in Danny Boyle’s film “28 Weeks Later,” it’s the government that ends up killing everybody because they don’t know who’s a zombie and who’s not.

Romero’s zombies have been replaced by newer, faster zombies. They used to be slow-moving but inevitable; you could put up a fight and kill as many as you could, but they would eventually overrun you, a force that can’t be stopped. Now, in movies, zombies are fast and mean and angry and strong, without that comical ”Oh my arm fell off but I’m still coming for you.” The stakes have been raised, with more emphasis on virus and disease and cataclysm. The zombie apocalypse has come home to a world that sometimes feels like it’s actually facing apocalypse. Thinking about the “Resident Evil” videogame (and now movies), if zombies stand in for anything now, it’s for the viruses that will infect our computers, our extensions of ourselves, the epidemics from H1N1 to financial disaster, a globalized virus (if the horror-movie model is anything, it’s viral) that can come in anywhere—whereas before zombies simply invaded house and home (there was literally one house in “Night of the Living Dead” in which the characters holed up—now we can’t hide anywhere on the planet).

So if zombies in the new age represent a global epidemic that can happen all over the world at once—if they’re a kind of globalization, then the topic of a book like Alan Goldsher’s that casts a real invasion as a zombie invasion is actually a useful allegory in the way another mash-up couldn’t be. 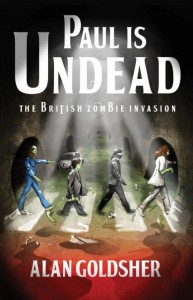 In “Paul Is Undead: The British Zombie Invasion,” the Beatles invasion is imagined as a zombie invasion, wherein zombie John Lennon kills and then reanimates Paul, George and Ringo to form a band that will take over the world, one teenage girl’s heart (and brain) at a time. Frankly, at first I wanted to hate it. Chicagoan Goldsher is a lucid critic and a smart writer—it quickly becomes obvious that he’s a giant music nerd, in a good way—but the idea for “Paul is Undead” seems beyond obvious, and I wanted the end result to be derivative, the bucket kick of a dying trend (so to speak). I wanted to review the book as a kind of platform from which to evaluate the monster trend in literature, hoping to create a polemic against a lazy genre that’s gone viral, a sign that signals some kind of literary (zombie) apocalypse. Instead, I found that he’d actually turned zombies into a productive allegory. Both the Beatles invasion and the zombie invasion are models for a strong moment of viral incursion, something creating hysteria that in a way was hard to understand and scary—they’re coming for your children!—for those 1960s parents, actually making the new model of zombies seem, ironically, much more relevant in this sixties context.

The second problem with writing off “Paul is Undead” is that the book is quirky, gory, bizarre, funny as hell and packs in tons of music history, often brilliantly, reading like a beautifully written Rolling Stone article told as an oral history with interviews with everyone from Stu Sutcliffe to Jesus himself. The allegorical moves are impeccable—Yoko Ono is a high-level ninja lord, which seems fairly realistic actually, and Mick Jagger is a zombie hunter who seeks to take down the zombie Fab Four. To avoid copyright issues, Goldsher works song titles and lyrics into conversation. That the book isn’t much more than that—with lots of music trivia and Beatles history thrown in—easily does enough to justify Goldsher’s appropriation in his creation of gratifying, smart candy for music geeks. In short, the book makes good on the Beatles and on zombies. It’s hard, by the end, to feel much of a sense of indignity at Beatles slander, unlike “Pride and Prejudice and Zombies,” for example, wherein English teachers like me can throw up our hands and talk about the dumbing down of literature, making it stupid and helpless (like a zombie). The biggest complaint we could make is that the meaning of the original book often gets lost or marginalized with the addition of a monster plotline. 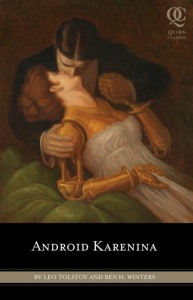 Ben Winters, former Newcity staff writer and author of “Sense and Sensibility and Sea Monsters” and “Android Karenina,” disagrees: not only are the ideas hilarious, but “people enjoy seeing things they thought they knew well reinterpreted and turned into something completely different.” Winters compares the Austen-monster books and his own upcoming “Android Karenina” to perennial versions of Shakespeare in unexpected locales, made into political satires. The Quirk books, he claims, have interesting cross-currents with the original meaning of the books; for example, Tolstoy was “really worried in life and in writing about the effect that technology, like the telegraph, was having on writing.” He also cites the fact that we “live in a world where everything is up for grabs in the creative marketplace.”

And finally, for Winters the argument begins and ends with the fact that these mash-up books are really funny. There are other arguments—that the books will get students to read the classics (I teach college writing, and the DePaul students I polled, however, were no more likely to read the originals after having read the monster versions), that at least it introduces folks to the language and characters of the originals, and similar “baby step” arguments that may or may not be persuasive. So, ultimately, most of the value of these books is going to lie in their entertainment value, and they’re all not nearly as funny the second time around.

If most mash-up books will end up remembered as only a brief trend in several years, authors like Goldsher who have updated the model and made it relevant again will actually add value to the genre. Goldsher’s next book is “Frankenstein Has Left the Building”—An Elvis/Frankenstein mash-up is just as smart a fit because Elvis, as Greil Marcus said, is a pure product of American culture—a similar creation, in form, to Frankenstein’s monster. 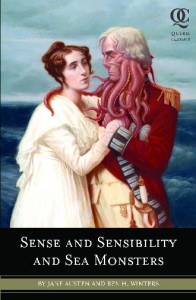 If we’re ushering in a new literary era, we’ve got to get beyond just calling the genre lazy, derivative, postmodern. Doing so just seems to dismiss horror mash-ups, especially those that make new use of old signifiers (see, for example the updating of vampires to stand in for teenage sexuality in the “Twilight” series) and reappropriate old symbols. Sure, there are ways to do this that are creative and meaningful, like creating new models for globalization that make smart, allegorical use of history, and then there’s just dropping a zombie into a book for a gag—which, if not undead, isn’t exactly a creative living literary activity. But perhaps something is happening in literature that we can’t just write off and call derivative, or we risk writing off the potential of the age we live in.

But if, on the other hand, this trend is in its dying days, what was it all about anyway? I talked about this question with two friends in Chicago recently, one a self-professed genre fiction geek, the other claims not to read. After a long debate during which I set forth blaming the internet, my friend Rine (the non-reader) pointed out that during other times of serious economic recession and depression, entertainment quickly took up fantasies of escapism.

This time around, we can’t even imagine a pleasant fantasy anymore.

I really hated P&P&Z. The author did the worst job imaginable of aping Austen’s style, and frankly, the addition of zombies was really weak. I could not have been more disappointed if he’d *tried* to write a crummy book.

Zombies: Undead Literary Trend Lives On | In the Stax: Everyone Loves a Good Book