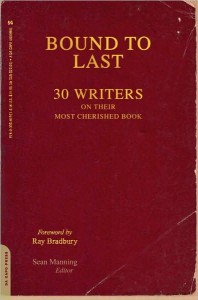 One sensibly approaches a “theme” book with trepidation, especially a compendium of writers describing their “most cherished book”—and most especially one in which the author who has written the foreword is by far the best known. When you read how Ray Bradbury’s aunt introduced him to the literary imagination, you might suspect this is as good as it will get.

If so, you would be wrong. Not only do many of these essays go to the soul of how their writers found their calling, but the diversity of their experiences is totally unexpected. For example, one essayist’s most cherished volume is a massive new masterpiece by his own favorite author, but because of his diminishing eyesight, they are also the last pages he will ever read.

This volume also breaks its own rules by admitting a visual artist, the widow of David Foster Wallace. Her grief at her husband’s suicide is magnified for us by her encounter with the Los Angeles Coroner’s Office, where she faces the commodification of death in the sale of gift items with chalk-line logos. She does not talk about viewing her husband’s body; this is raw enough.

Refreshingly, this collection poignantly delivers even more than it promises. (Martin Northway)