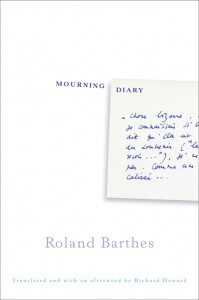 “Each of us has his own rhythm of suffering, ” insists one entry in “Mourning Diary,” but there’s invaluable universal truth about suffering and loss to be found in the private journal (never intended for publication) following the last few years of the life of Roland Barthes, French post-structural theorist and exquisite close reader of texts. Barthes began the diary the night of his adored mother’s death, jotting down his feelings and thoughts on index-sized slips of paper. He kept the diary for years, writing in it almost daily while producing his final theoretical books; and it’s exciting for the Barthes enthusiast to track ideas from and references to the author’s concurrent academic work in “Mourning Diary” (you can follow the composition of “Camera Lucida,” for example). But even for the reader with no intellectual investment in the end of Barthes’ career, this fragmentary, delicately skeletal account of grief—more of a “hypothesis of a book” than a full-bodied text, as the book’s annotator calls it, feels truthful about the disorienting capriciousness of the pain of absence. “What I find utterly terrifying is mourning’s discontinuous character” Barthes notes in one entry; most entries are just a brief sentence or two, moments that reflect the way that mourning “does not wear away, because it is not continuous.” And while Barthes is extremely self-conscious about expressing his grief—“suffering is a form of egoism”—there’s nothing narcissistic about these entries, which bear Barthes’ characteristic honesty and insight in haiku-like fragments. In fact, it’s so personally and painfully open, with none of the sleights of hand and ironies that generally balance out Barthes’ revelatory writing, that the reader almost feels like a voyeur at moments. But Barthes’ friend and longtime translator Richard Howard, in preparing “Mourning Diary” for publication, was careful to balance out the vulnerability of deeply private entries with those that explore major philosophical problems of experience, time, life and death. “Who knows? Maybe something valuable in these notes” says one entry, and while Barthes never wrote publicly about his grief “for fear of making literature out of it,” this posthumous text is precisely the kind of profound but understated treatment of mourning that does justice to both author and subject. (Monica Westin)