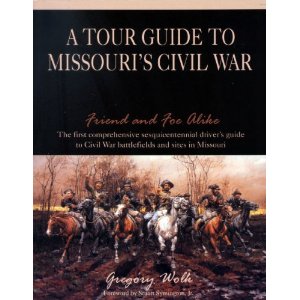 Call it the war next door: When the sesquicentennial of the 1861-1865 Civil War commences in 2011, for Illinoisans it will be all about Lincoln, but Missourians will flash back to their conflict of “10, 000 nasty incidents” in a divided state represented in both the Union and Confederate Congresses.

Gregory Wolk’s guidebook offers a fresh gateway to a brutal, local war often overshadowed by narratives focusing on battles in the East. But during the war’s first year, 40 percent of the battles and engagements were fought in Missouri; and throughout the war there was desperate guerrilla fighting, which actually had begun along the Kansas border in 1854.

Cross the Mississippi anywhere, and this book will lead you to notable monuments, cemeteries and battlefields: follow the paths of U.S. Grant and of Confederate cavalry raids, of guerrillas Jesse James and “Bloody Bill” Anderson. Here are hundreds of destinations, dozens of battle narratives and engaging sidebars on fascinating, controversial personalities.

In St. Louis, for example, some of the war’s “first blood” was drawn in May 1861 when Union militia killed about twenty-eight civilians while marching away Southern sympathizers they had disarmed at Camp Jackson. The U.S. Army’s Jefferson Barracks had been a pre-war post to many future Civil War leaders and includes a massive military cemetery and developing historic museum. Bellefontaine and Calvary cemeteries include numerous prominent leaders among their burials, like Union General William T. Sherman and Missouri Confederate General (and Governor) Sterling “Pap” Price.

The central part of the state around Jefferson City and Columbia is likewise accessible and rich in history. Historic Arrow Rock yields a rare look back into antebellum life, and communities like Boonville, Fulton and Marshall all have diverting Civil War destinations. North of Columbia—home of the University of Missouri—you can walk the ground near Centralia where Capt. “Bloody Bill” Anderson’s guerrillas—among them 16-year-old Jesse James—famously shattered a Union militia battalion.

These destinations and personalities are all included in the book, which also features a summary of key stages of the war in Missouri. A close longtime student of these events, Wolk—an attorney by trade—is also president of Missouri’s Civil War Heritage Foundation, educating the public with such projects as the pending Gray Ghosts and U.S. Grant Trails. Find out more online at mocivilwar.org.

There is a Yankee tilt in his accounts, and a few small lapses; but this accessible, entertaining travel guide is the best so far to a war next door that has been invisible for too long. (Martin Northway)